Dramatic difference discovered in behaviour of matter and antimatter 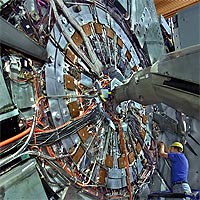 The BaBar detector at SLAC.

On August 2nd 2004, particle physicists from the UK and around the world working on the BABAR experiment at the Stanford Linear Accelerator Center (SLAC) in the USA, announced exciting new results demonstrating a dramatic difference in the behaviour of matter and antimatter. Their discovery may help to explain why the Universe we live in is dominated by matter, rather than containing equal parts matter and anti-matter.

SLAC's PEP-II accelerator collides electrons and their antimatter counterparts, positrons, to produce an abundance of exotic heavy particle and anti-particle pairs known as B and anti-B mesons. These rare forms of matter and antimatter are short-lived, decaying in turn to other lighter subatomic particles, such as kaons and pions, which can be seen in the BABAR experiment.

'If there were no difference between matter and antimatter, both the B meson and the anti-B meson would exhibit exactly the same pattern of decays. However, our new measurement shows an example of a large difference in decay rates instead.' said Marcello Giorgi, of SLAC, Pisa University and INFN, Spokesman of BABAR.

By sifting through the decays of more than 200 million pairs of B and anti-B mesons, experimenters have discovered striking matter-antimatter asymmetry. 'We found 910 examples of the B meson decaying to a kaon and a pion, but only 696 examples for the anti-B', explained Giorgi. 'The new measurement is very much a result of the outstanding performance of SLAC's PEP-II accelerator and the efficiency of the BABAR detector. The accelerator is now operating at 3 times its design performance and BABAR is able to record about 98% of collisions.'

While BABAR and other experiments have observed matter-antimatter asymmetries before, this is the first time that a difference has been found by simple counting of the number of decays of B and anti-B mesons to the same final state. This effect is known as direct CP violation and is found to be 13%; a similar effect occurs for decays of Kaons and antiKaons but only at the level of 4 parts in a million!

'This is a strong, convincing signal of direct CP violation in B decays, a type of matter-antimatter asymmetry which was expected to exist but has not been observed before. With this discovery the full pattern of matter-antimatter asymmetries is coming together into a coherent picture. I am very excited and pleased as one of my postgraduate students, Carlos Chavez who is currently at SLAC, was directly involved.' said Christos Touramanis of the University of Liverpool.

Dan Bowerman, a member of the BABAR team from Imperial College adds 'When the universe began with the big bang, matter and antimatter were created in equal amounts. However, all observations indicate that we live in a universe made only of matter. So we have to ask, what happened to the antimatter? The work at BABAR is bringing us closer to answering this question.'

Subtle differences between the behaviour of matter and antimatter must be responsible for the matter-antimatter imbalance that developed in our universe. But our current knowledge of these differences is incomplete and insufficient to account for the observed matter domination. CP violation is one of the three conditions outlined by Russian physicist Andrei Sakharov to account for the observed imbalance of matter and antimatter in the universe.

Professor Ian Halliday, Chief Executive of the Particle Physics and Astronomy Research Council which funds UK participation in BABAR said: 'We still don't understand fully how the matter dominated Universe we live in has evolved. However this new result, and recent related measurements in BABAR and other experiments around the world, have greatly advanced our understanding in this area. There is still much to discover and learn on this fundamental issue.'