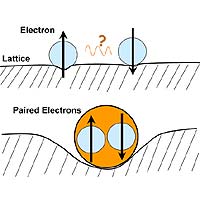 A ceramic high temperature superconductor is actually a very poor metal, almost an insulator, at room temperature because electrons interact only slightly with the solid lattice (top), as represented by a slight depression in the crystal lattice. As the ceramic is cooled below a critical temperature, however, electrons pair up and are able to 'dance' with the vibrating lattice, stabilizing one another, as represented by a deep impression in the lattice. (Graphic by Gey-Hong Gweon/LBNL)

An elegant experiment conducted by University of California, Berkeley, and Lawrence Berkeley National Laboratory (LBNL) scientists, in collaboration with a group of scientists at Tokyo University, shows clearly that in high temperature superconductors, vibrations in the crystal lattice play a significant though unconventional role.

The results, reported in the July 8 issue of Nature, shed much-needed light on the enigmatic superconductors which, 18 years after their discovery, still puzzle theoreticians and experimentalists. The findings also could point scientists to new materials to explore as possible superconductors.

"We know that there are in nature different materials that might be superconductors, but up to now these new superconductors have not been found," said lead researcher Alessandra Lanzara, assistant professor of physics at UC Berkeley and faculty scientist at LBNL. "In a way, these results will put the finger on some classes of material that are a potentially important system for superconductivity."

High temperature superconductors are almost always some type of copper oxide (cuprate) ceramic doped with a variety of elements, from bismuth, yttrium and lanthanum to strontium and calcium. For unknown reasons, this mélange of atoms conducts electricity without resistance at temperatures as high as 130 degrees above absolute zero (130 K or -143 degrees Celsius), unlike the conventional metallic superconductors that must be cooled below 20 K to become superconducting.

While conventional superconductors are explained by the seminal Nobel-Prize winning Bardeen-Cooper-Schrieffer (BCS) theory, high temperature superconductivity is still in search of a theoretical explanation. In the BCS theory, each electron pairs with an electron of opposite spin to form a new entity, a Cooper pair, that can move without resistance through the material. The pairing is made possible by interactions between the electrons and the metal atoms vibrating in place in the crystal lattice. The lattice is the ordered three-dimensional arrangement of atoms in a solid, like the scaffolding of a crystal.

"There is this ongoing debate whether phonons play any role in superconductivity and whether magnetism is the important clue that determines the properties of cuprates," Lanzara said. "We thought, 'This debate is going to go on forever unless we come up with some new experiment.' The collaboration with the group of Professor Hide Takagi and Dr. Takao Sasagawa in Tokyo University, who have provided unique high-quality single crystals, has made this experiment possible".

The experiment, which involved tweaking the material's crystal lattice by substituting heavier oxygen-18 for some of the normal oxygen-16, showed that a heavier and thus stiffer lattice affected the electron cloud that permeates the superconductor.

"We are able with ARPES to extract information regarding the influence of the lattice on the single electron dynamics in the cuprates, directly and unambiguously," Gweon said, referring to angle-resolved photoemission spectroscopy (ARPES), which is used to measure the velocity of the electrons in a material.

"The results we found provide the first direct evidence for a significant and unconventional role of phonons in the high temperature superconductivity, meaning that all the reasons that have been used so far to disregard the importance of phonons are not valid anymore," Lanzara said.

"Our experiment doesn't say one way or another whether phonons are the only component, but it does say that phonons play a very important role," added Gey-Hong Gweon, the first author and a postdoctoral physicist at LBNL. "But our results definitely show that there is a strong interaction between the lattice and the electrons, in a way that cannot be disregarded as is done in many theories."

Lanzara, Gweon and theorist Dung-Hai Lee, UC Berkeley professor of physics, agree with many of their colleagues that in high temperature superconductors, the repulsive electron-electron interaction is very strong, and that the tendency for electrons of opposite spins to pair up into a "singlet' has a lot to do with the antiferromagnetic interaction that's responsible for making the undoped ceramic materials antiferromagnets. However, they also believe that this tendency to form spin singlets enhances the interaction between the electrons and the phonons.

Such an electronically enhanced electron-phonon coupling is similar to what happens in the so-called spin-Peierls systems, where alternating electrons in a solid lattice adopt opposite spins and, as a result, pair up into an ordered system similar to Cooper pairing, though these pairs do not roam the solid but stay near their lattice electrons. The alternating spin arrangement that characterizes spin-Peiels behavior is identical to the antiferromagnetic situation in high temperature superconductors.

The team believes, then, that the mutual feedback of the magnetic and electron-phonon interaction is critical to the high temperature superconducting state. There is pairing in the two populations of electrons, one "localized" and the other "free," both perhaps enhanced by the electrons' interactions with the crystal lattice. According to Lee, if the localized electron pairs are bound lightly enough to the lattice atoms, they can resonate with the coherent motion of the Cooper pairs of free conducting electrons, leading to superconductivity.

"There are materials where the electron-phonon interaction enhances a spin type of ordering and vice versa. This has not been observed before in high temperature superconductors," Lanzara said. "The formation of the electron pair, the Cooper pair, is mediated through the phonons, and at the same time there is a feedback from the magnetic interaction. So, the two enhance one another."

The team worked with a material called Bi-2212, which is a copper oxide doped with bismuth, strontium and calcium that becomes superconducting at 92 K (-181 degrees Celsius). The crystal structure is basically comprised of two alternating layers: one a plane of copper and oxygen molecules interspersed with strontium and calcium atoms, the other a lattice of bismuth and oxygen. The team replaced some of the oxygen with a heavier isotope, O-18, and used the ARPES technique to measure the energy or velocity of the electrons in the material.

"These data provide the first direct evidence for a significant role that phonons play in the high temperature superconductivity," Gweon said.

The work was supported by the Department of Energy.