First Pictures From The Map Of The Universe Mission 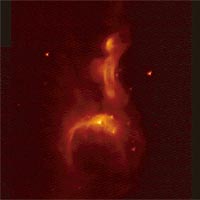 Reflection nebula IC4954 taken by the one of the two on-board instruments, the near- and mid- infra-red Camera (IRC, figure 1). The observed wavelength is 9 microns. The region is at a distance of about 6000 light years and extends more than 10 light years. Star formation has taken place in this region over several million years. In the infra-red images, astronomers can find individual stars that have recently been born. These stars are embedded in gas and dust and cannot be seen in visible light. We can also see the dust clouds from which the stars are made.)

An ambitious mission by the Japan Aerospace Exploration Agency (JAXA) to make a new, high resolution map of the universe has just successfully returned its first pictures, and UK team members are delighted with the success. The AKARI (formerly ASTRO-F and meaning (light)) infra-red space telescope is making its All-Sky Survey at infra-red wavelengths with sharper images and a much higher sensitivity than the first infra-red astronomical sky survey satellite launched in 1983. AKARI will leave a tremendous legacy for the future of astronomy. Most of the light ever emitted in the Universe was emitted in the infra-red part of the spectrum, so the range of objects that can be studied by this survey is huge.

On May 22nd, at a press conference in Japan, JAXA released spectacular infra-red images of the Nebula IC 4954 that show the birth of stars in their cradle of formation.

'These first images are extremely promising,' said Dr Stephen Serjeant, Senior Lecturer in Astrophysics at the Open University. 'The beautiful filigree structure in the nebula was impossible to see with the previous satellite, the Infra-Red Astronomical Satellite (IRAS). After having worked on this for so many years, it is wonderful to see our labours rewarded so clearly. AKARI can do many things that no other telescope on the Earth or in space can.'

Glenn White, Professor of Astronomy at The Open University and The CCLRC Rutherford Appleton Laboratory, added 'The AKARI mission will redefine our view of the Universe at infra-red wavelengths, achieving considerably sharper images through its improved higher spatial resolution and sensitivity over the whole sky than previously available. It offers a major new observatory facility to probe the cradles of star formation, that are normally obscured from the view of other telescopes, the formation and evolution of planetary systems, and to observe the embryonic galaxies assembling toward the edge of the observable universe. History tells us that any similar step forward in performance over what has gone before, is likely to reveal unexpected new phenomena or classes of objects that can help to redefine our understanding of the Universe.'

Dr Richard Savage, postdoctoral research fellow at the University of Sussex, said 'It's wonderful to see the first images coming from the AKARI space telescope, after so much hard work by everyone on the project. It's particularly gratifying to see how well AKARI is functioning; this bodes extremely well for the science we will be able to produce from the mission.'

Prof Michael Rowan-Robinson, Head of Astrophysics at Imperial College London, said 'The great power of the AKARI mission is that it is an all-sky survey in the far infra-red with improved sensitivity and greatly improved resolution compared to the IRAS mission of the 1980s. It will be a major step forward at these wavelengths.'

Dr Seb Oliver, reader in Astronomy at the University of Sussex, said 'Dr Savage and I have just returned from Japan where we spent an exhausting time looking at the first data from Akari. We are delighted that everything appears to be performing just as we hoped and look forward to many exciting results to come.'

Dr Chris Pearson, European Space Agency (ESA) support astronomer to the Japanese at JAXA's Institute of Space and Aeronautical Science (ISAS), said 'It is an enormous milestone for all those involved in the AKARI mission to finally see the fruits of their years of hard labour manifested in these breathtaking images of our infra-red Universe. The team is now looking forward to producing an atlas of the entire infra-red sky in addition to many more such beautiful images.'

The Open University, University of Sussex, Imperial College London and SRON/Groningen contribution to AKARI is in critical software involved in translating the data received from the satellite into catalogues of infra-red sources as well as sky images, using the team's long experience with previous space telescopes. The team is very pleased to be providing the star and galaxy detection software, the final link in the data processing pipe-line.

AKARI is a Japanese space telescope with UK, Netherlands and ESA involvement. British astronomers are contributing to this major new space mission, both in terms of data analysis and exploitation. Teams at Imperial College London, the Open University, and the University of Sussex, together with the Netherlands Institute for Space Research and Groningen University in The Netherlands, developed some of the data analysis for AKARI, and will be working on AKARI's ground-breaking all-sky infra-red survey. Also, European astronomers (including in the UK) get a tenth of the non-survey time on part of this major new space mission for their own research, thanks to the collaboration of the European Space Agency in some of AKARI's technical aspects.