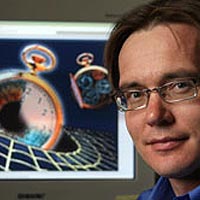 Associate physics professor Andrei Derevianko and his team isolated and explained a significant portion of the error in atomic clock output. (Photo by: Jean Dixon)

Andrei Derevianko, Kyle Beloy, and Ulyana Safronova sat down six months ago and began work on a calculation that will help the world keep better time. In competition with scientists at the University of New South Wales, the University team led by associate professor Derevianko conducted research that increased the accuracy of atomic clocks, and they did it without running a single experiment.

The team’s findings were submitted to one of the most prestigious physics journals, the “Physical Review Letters,” and they were published immediately on July 18.

“Our findings didn’t take a lot of criticism,” Derevianko said. “The results are too clear and obvious to be disputed.”

In its research, the University team was able to isolate and explain a significant portion of the error in atomic clock output. The portion of error that the team studied has now been cut to one-fiftieth of its original size. The team’s research was based solely on calculations, many of which were conducted on high performance computers.

Kyle Beloy, a third-year graduate student in the University’s physics department, was the primary author of the paper containing the team’s results and he was thrilled to play a role in such a notable find. Ulyana Safronova, a University research professor, also contributed to the findings.

In 2004, an Italian research team found some convincing evidence that suggested that atomic clocks were less accurate then previously thought. This evidence concerned the scientific community and gave the theory behind atomic clocks renewed international attention.

“It seemed like a good time to reexamine the problem,” Derevianko said. “The uncertainty of the issue was a good primer for the research.”

Atomic clock technology is based on the fact that atoms emit a fixed frequency. Lasers, which also have operating frequencies, can be calibrated so that their frequencies match that of a given atom. Since atomic frequencies are constant, syncing a laser with an atom and counting the laser’s oscillations will always provide a steady measurement of time.

The new findings are also paving the way for all kinds of new scientific experimentation. Extremely accurate measurements are required to make estimations about the behaviors of the universe. The extra time-keeping precision will allow scientists to explore hypotheses about the big-bang theory. The improved technology might even be accurate enough to provide evidence related to the controversial theory that universal constants, as in the amount of charge in an electron, are changing. 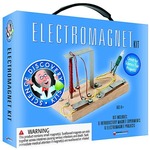