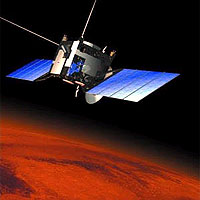 Just before midnight on 2 June (23:45 local time, 19:45 CET) a Soyuz rocket operated by Starsem will lift off from the Baikonur Cosmodrome, and Mars Express will be on its way. The spacecraft was given the green light to launch following completion of a successful flight readiness review on 3 May.

The Mars Express launch window opens on 23 May and lasts only four weeks. However, just before the spacecraft was due to leave Toulouse, France, for its trip to Baikonur in Kazakhstan, engineers discovered a fault in one of the electronics modules. "Of course, it was the most difficult box to remove from the spacecraft," says with a smile Rudi Schmidt, Mars Express Project Manager.

In view of the estimated time needed to correct the fault, the launch date was initially put back from 23 May to 6 June, still within the launch window. However, thanks to the skill and dedication of the engineering team, the job was completed sooner than expected and the launch date was brought forward.

Mars Express is currently being fuelled, an operation that takes about a week. It will then be attached to Fregat, the Soyuz upper stage rocket booster, and mated with the Soyuz rocket. The whole system will be rolled out to the pad four days before launch. The journey to Mars will take six months and the spacecraft should enter its Martian orbit on 26 December.

Europe’s contribution to the exploration of the Red Planet will begin soon.