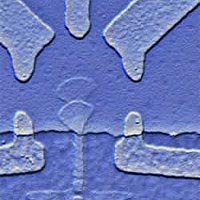 Using the nanoscale device shown in this electron microscope image, physicists at Rice University have completed the first real-time measurement of individual electrons. Measuring around one-millionth of a meter in length, the device was built atop an ultrathin film of semiconducting gallium arsenide. The research appears in the May 22 issue of the journal Nature (pg. 422-5).

At top, a ring-shaped electric field runs round the tips of the five (light-colored) gold wires, creating a central island where some 80 electrons are isolated from electrons in the rest of the structure. By chilling the entire structure to ultracold temperatures and raising the energy level of the barrier field, physicist Alex Rimberg and graduate students Wei Lu and Zhongqing Ji slowed electron motion enough to measure the coming and going of individual electrons.

Electrons enter the island from the left and exit to the right, moving through the barrier at the gaps between wires. Arrivals and departures are measured with a radio-frequency single-electron transistor, or RF-SET (at bottom). The RF-SET registers changes in the amplitude of radio waves that reflect off of the T-shaped piece of aluminum protruding from the bottom of the pool

Physicists at Rice University have completed the first real-time measurement of individual electrons, creating an experimental method that for the first time allows scientists to probe the dynamic interactions between the smallest atomic particles.

The research, which appears in the May 22 issue of the journal Nature, is important for researchers developing quantum computers, a revolutionary type of computer that is orders of magnitude more powerful than any computer ever built.

Due to the complexities of quantum dynamics, electrons can serve as qubits. They can exist in "up" and "down" states -- single points that are analogous to the ones and zeroes in classical computers -- or in "superposition" states, which are not single points but patterns of probability that exist in several places at once.

The Rice experiments took place in an ultracold chamber chilled to temperatures below those found in deep space. There, for the first time, scientists were able to observe individual electrons as they moved onto and off of a nanoscopic piece of a semiconductor known as a quantum dot.

"Since no one has measured single electron dynamics before, the door is wide open for new investigations," said lead researcher Alex Rimberg, assistant professor of Physics and Astronomy and of Electrical and Computer Engineering. "These include studies of the interactions between individual electrons, as well as the quantum phenomena that engineers must understand if they ever want to build a working quantum computer."

Rimberg’s group, which includes graduate students Wei Lu and Zhongqing Ji, built its quantum dot using an ultra-thin layer of semiconducting gallium arsenide. Using gold wiring, they created a ring-shaped electrostatic field, isolating a small pool of electrons on a 300-nanometer piece of gallium arsenide inside the ring. An extremely sensitive charge-sensing device called a radio-frequency single-electron transistor (RF-SET) was placed next to the pool. Operating in a fashion akin to an AM radio, the RF-SET registered changes in the amplitude modulation of radio waves reflected by the pool. The modulations changed as electrons entered and left the pool.

"We were able to tune this system so that our pool was equally happy with, say, 79 or 80 electrons," said Rimberg. "By raising the power of the electric field, we raised the barrier around the pool, making it very difficult for electrons to enter or leave the pool. That allowed us to slow down the electron motion enough to measure the coming and going of individual electrons."

Though physicists have used SET technology to measure the movement of single electrons for several years, the response time in previous experiments was about 1,000 times slower. Rimberg likened the difference to a system that could detect commuters moving in and out of Grand Central Station.

"Before, you could say that individual people were coming and going from the station, and you knew the average number of people in the station, but each measurement took several minutes, so you could never say precisely when a particular individual arrived or left," said Rimberg.

Like commuters jockeying for position on a railway platform, electrons also interact with one another in close proximity. Rimberg hopes physicists can use the ultracold RF-SET system to test competing theories that explain how electrons influence each another.

The research was sponsored by the National Science Foundation, the Army Research Office and the Robert A. Welch Foundation.