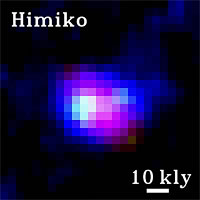 This image of the Himiko object is a composite and in false color. The thick horizontal bar at the lower right corner presents a size of 10 thousand light year.

This image is created by M. Ouchi et al., which is the reproduction of Figure 2 in the article of The Astrophysical Journal May 2009 - 10 v696 issue.

Using information from a suite of telescopes, astronomers have discovered a mysterious, giant object that existed at a time when the universe was only about 800 million years old. Objects such as this one are dubbed extended Lyman-Alpha blobs; they are huge bodies of gas that may be precursors to galaxies. This blob was named Himiko for a legendary, mysterious Japanese queen. It stretches for 55 thousand light years, a record for that early point in time. That length is comparable to the radius of the Milky Way’s disk.

The researchers are puzzled by the object. Even with superb data from the world’s best telescopes, they are not sure what it is. Because it is one of the most distant objects ever found, its faintness does not allow the researchers to understand its physical origins. It could be ionized gas powered by a super-massive black hole; a primordial galaxy with large gas accretion; a collision of two large young galaxies; super wind from intensive star formation; or a single giant galaxy with a large mass of about 40 billion Suns. Because this mysterious and remarkable object was discovered early in the history of the universe in a Japanese Subaru field, the researchers named the object after the legendary mysterious queen in ancient Japan.

“The farther out we look into space, the farther we go back in time, “ explained lead author Masami Ouchi, a fellow at the Observatories of the Carnegie Institution who led an international team of astronomers from the U.S., Japan, and the United Kingdom. “I am very surprised by this discovery. I have never imagined that such a large object could exist at this early stage of the universe’s history. According to the concordance model of Big Bang cosmology, small objects form first and then merge to produce larger systems. This blob had a size of typical present-day galaxies when the age of the universe was about 800 million years old, only 6% of the age of today’s universe!”

This reionizing chapter in the universe was at the cosmic dawn, the epoch between about 200 million and one billion years after the Big Bang. During this period, neutral hydrogen began to form quasars, stars, and the first galaxies. Astronomers probe this era by searching for characteristic hydrogen signatures from the scattering of photons created by ionized gas clouds.

The team initially identified Himiko among 207 distant galaxy candidates seen at optical wavelengths using the Subaru telescope from the Subaru/XMM-Newton Deep Survey Field located in the constellation of Cetus. They then made spectroscopic observations to measure the distance with the Keck/DEIMOS and Carnegie’s Magellan/IMACS instrumentation. Himiko was an extraordinarily bright and large candidate for a distant galaxy. “We hesitated to spend our precious telescope time by taking spectra of this weird candidate. We never believed that this bright and large source was a real distant object. We thought it was a foreground interloper contaminating our galaxy sample,” continued Ouchi. “But we tried anyway. Then, the spectra exhibited a characteristic hydrogen signature clearly indicating a remarkably large distance—12.9 billion light years!”

“Using infrared data from NASA’s Spitzer Space Telescope and the United Kingdom Infrared Telescope, radio data from the VLA, and X-ray imaging from the XMM-Newton satellite, we were able to estimate the star-formation rate and stellar mass of this galaxy and to investigate whether it contains an active nucleus powered by a super-massive black hole,” remarked James Dunlop a team member at Edinburgh. “We found that the stellar mass of Himiko is an order of magnitude larger than other objects known at a similar epoch, but we cannot as yet tell if the center houses an active and growing black hole.”

“One of the puzzling things about Himiko is that it is so exceptional,” said Carnegie’s Alan Dressler, a member of the team. “If this was the discovery of a class of objects that are ancestors of today’s galaxies, there should be many more smaller ones already found—a continuous distribution. Because this object is, to this point, one-of-a-kind, it makes it very hard to fit it into the prevailing model of how normal galaxies were assembled. On the other hand, that’s what makes it interesting!”

The research is published in the May 10, 2009, issue of The Astrophysical Journal. The work was funded by the NASA through an award issued by JPL/Caltech, the Department of Energy, and the Carnegie Institution. The research is based in part on data collected at Subaru Telescope, which is operated by the National Astronomical Observatory of Japan; the W.M. Keck Observatory, which is operated as a scientific partnership among the California Institute of Technology, the University of California, and the National Aeronautics and Space Administration (NASA); the Spitzer Telescope, managed by JPL for NASA; the Magellan telescopes operated by a consortium consisting of the Carnegie Institution, Harvard University, MIT, the University of Michigan, and the University of Arizona; and the United Kingdom Infrared Telescope, which is operated by the Joint Astronomy Centre on behalf of the Science and Technology Facilities Council of the UK.