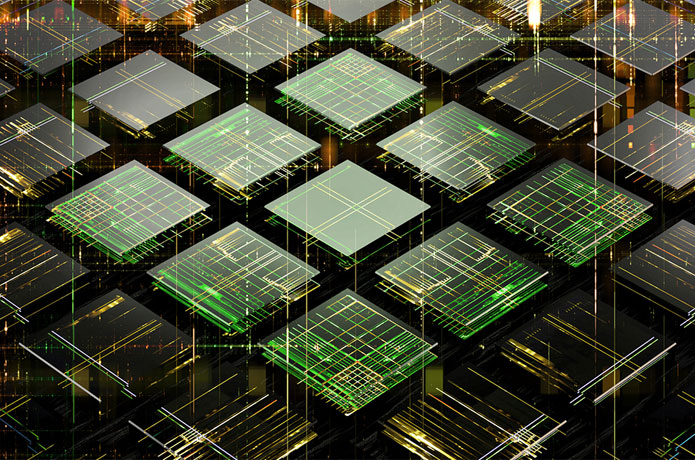 A team of researchers led by the Department of Energy’s Lawrence Berkeley National Laboratory (Berkeley Lab) has developed a simple method that could turn ordinary semiconducting materials into quantum machines – superthin devices marked by extraordinary electronic behavior. Such an advancement could help to revolutionize a number of industries aiming for energy-efficient electronic systems – and provide a platform for exotic new physics.

The study describing the method, which stacks together 2D layers of tungsten disulfide and tungsten diselenide to create an intricately patterned material, or superlattice, was published online recently in the journal Nature.

“This is an amazing discovery because we didn’t think of these semiconducting materials as strongly interacting,” said Feng Wang, a condensed matter physicist with Berkeley Lab’s Materials Sciences Division and professor of physics at UC Berkeley. “Now this work has brought these seemingly ordinary semiconductors into the quantum materials space.”

Two-dimensional (2D) materials, which are just one atom thick, are like nanosized building blocks that can be stacked arbitrarily to form tiny devices. When the lattices of two 2D materials are similar and well-aligned, a repeating pattern called a moiré superlattice can form.

For the past decade, researchers have been studying ways to combine different 2D materials, often starting with graphene – a material known for its ability to efficiently conduct heat and electricity. Out of this body of work, other researchers had discovered that moiré superlattices formed with graphene exhibit exotic physics such as superconductivity when the layers are aligned at just the right angle.

The new study, led by Wang, used 2D samples of semiconducting materials – tungsten disulfide and tungsten diselenide – to show that the twist angle between layers provides a “tuning knob” to turn a 2D semiconducting system into an exotic quantum material with highly interacting electrons.

Entering a new realm of physics

Co-lead authors Chenhao Jin, a postdoctoral scholar, and Emma Regan, a graduate student researcher, both of whom work under Wang in the Ultrafast Nano-Optics Group at UC Berkeley, fabricated the tungsten disulfide and tungsten diselenide samples using a polymer-based technique to pick up and transfer flakes of the materials, each measuring just tens of microns in diameter, into a stack.

They had fabricated similar samples of the materials for a previous study, but with the two layers stacked at no particular angle. When they measured the optical absorption of a new tungsten disulfide and tungsten diselenide sample for the current study, they were taken completely by surprise.

The absorption of visible light in a tungsten disulfide/tungsten diselenide device is largest when the light has the same energy as the system’s exciton, a quasiparticle that consists of an electron bound to a hole that is common in 2D semiconductors. (In physics, a hole is a currently vacant state that an electron could occupy.)

For light in the energy range that the researchers were considering, they expected to see one peak in the signal that corresponded to the energy of an exciton.

Instead, they found that the original peak that they expected to see had split into three different peaks representing three distinct exciton states.

What could have increased the number of exciton states in the tungsten disulfide/tungsten diselenide device from one to three? Was it the addition of a moiré superlattice?

To find out, their collaborators Aiming Yan and Alex Zettl used a transmission electron microscope (TEM) at Berkeley Lab’s Molecular Foundry, a nanoscale science research facility, to take atomic-resolution images of the tungsten disulfide/tungsten diselenide device to check how the materials’ lattices were aligned.

The TEM images confirmed what they had suspected all along: the materials had indeed formed a moiré superlattice. “We saw beautiful, repeating patterns over the entire sample,” said Regan. “After comparing this experimental observation with a theoretical model, we found that the moiré pattern introduces a large potential energy periodically over the device and could therefore introduce exotic quantum phenomena.”

The researchers next plan to measure how this new quantum system could be applied to optoelectronics, which relates to the use of light in electronics; valleytronics, a field that could extend the limits of Moore’s law by miniaturizing electronic components; and superconductivity, which would allow electrons to flow in devices with virtually no resistance.

Also contributing to the study were researchers from Arizona State University and the National Institute for Materials Science in Japan.

The work was supported by the DOE Office of Science. Additional funding was provided by the National Science Foundation, the Department of Defense, and the Elemental Strategy Initiative conducted by MEXT, Japan, and JSPS KAKENHI. The Molecular Foundry is a DOE Office of Science user facility.