If a car is traveling with a helium-filled balloon in the back seat, and the car suddenly stops, what happens to the balloon?

Short Answer: The balloon does the opposite to whatever your body would do. Thus, if the car comes to rest the balloon moves towards the back. The key is that the balloon is filled with helium (He) and you are made up of stuff much heavier than air. Suppose you had the balloon filled with He and tied to the floor of your car, perhaps, around your hand brake and your car is at stopped. If you then 'hammer the gas pedal' you will be pushed back in to your seat whereas the balloon will go forward! Turn left, the balloon goes right. Turn right the balloon goes left, and stop - the balloon goes back. It has to do with the motion of the air in your car. When you are at rest and then go forward all of the air rushes to the back of the car and you have created an area in the back of your car of higher air pressure. Since He is lighter than air it wants to 'float' away from that area and moves forward.
Answered by: Peter Feeney, B.S., HS Physics Teacher

The movement of a helium-filled balloon is the result of a difference in the density of the surrounding air. Since on Earth, the air density is higher the lower you are in the atmosphere due to the weight of the air itself, the force per square inch (pressure) it exerts on the balloon is less at the top of the balloon that it is at the bottom, resulting in an unbalanced force called thebuoyantt force. If this buoyant force is greater than the weight of an object, as is the case for a helium-filledballoonn, the object will rise in the air, moving toward the airwithh a lower density. When a car stops suddenly, the air inside the car continues to move forward a little longer than the car itself, due to the tendancy of an object to maintain its motion until a force acts on it (inertia). The air is stopped by the front of the car's interior and tends to 'pile up' there. As a result, the air in the front of the car becomes slightly more dense than the air in the rear of the car, creating more pressure on the front side of the balloon. This causes the balloon to move toward the rear of the car, where the air is less dense, just as the same balloon released outside will move upward, toward the less dense air. Interestingly, a helium-filled balloon released on board an orbiting spacecraft will neither rise nor fall, since it is the weight of the air that creates the differences in air density here on the Earth. In free fall everything is falling at the same rate and is in a weightless state, so the air is of equal density everywhere on board the spacecraft.
Answered by: Andrew Franks, M.A., Physics Teacher, Lee High School, Midland, Texas

As Einstein's General Theory of Relativity emphasizes, acceleration due to a change in velocity and the acceleration due to gravity are equivalent. A sudden stop results in an acceleration towards the front of the vehicle,indistinguishablee to its occupants from a gravitational force that would be felt if the car were to be held stationary in a 'down hill' orientation. Your question, therefore, is equivalent to asking 'What happens to a helium balloon in a car parked facing down a steep hill?' The answer, of course, is that the balloon moves toward the rear of the car.
Answered by: Paul Walorski, B.A., Part Time Physics/Astronomy Instructor
'The mathematician's patterns, like the painter's or the poets, must be beautiful; the ideas, like the colours or the words, must fit together in a harmonious way. Beauty is the first test: there is no permanent place in the world for ugly mathematics.' 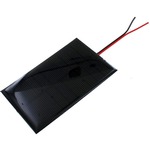