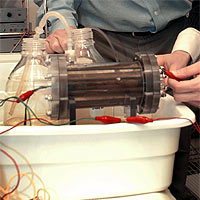 Penn State environmental engineers have shown, for the first time, that a microbial fuel cell (MFC) can generate electricity while simultaneously cleaning the wastewater that you flush down the drain or toilet.

So far, the Penn State experiments have produced between 10 and 50 milliWatts of power per square meter of electrode surface, or about 5 percent of the amount needed to run one mini-Christmas tree light, while removing up to 78 percent of organic matter as measured by biochemical oxygen demand (BOD).

Bruce E. Logan, the Kappe professor of environmental engineering and director of the project, says, "MFCs may represent a completely new approach to wastewater treatment. If power generation in these systems can be increased, MFC technology may provide a new method to offset wastewater treatment plant operating costs, making advanced wastewater treatment more affordable for both developing and industrialized nations."

The project is described in a paper, 'Production of Electricity During Wastewater Treatment Using a Single Chamber Microbial Fuel Cell', released on-line and scheduled for a future issue of Environmental Science and Technology. The authors are Hong Liu, postdoctoral researcher in environmental engineering; Ramanathan Ramnarayanan, doctoral candidate in materials; and Logan.

Logan notes that in MFCs currently under investigation in other laboratories, various kinds of bacteria are typically added to the system. However, in the Penn State approach, no special bacteria are added. The naturally occurring bacteria in wastewater drive power production via a reaction that allows them to transport electrons from the cell surface to the anode. In addition, a reaction (oxidation) that occurs in the interior of the bacterial cell lowers the biochemical oxygen demand, cleaning the water.

The current Penn State MFC is about six inches long and 2.5 inches in diameter. It contains eight anodes, composed of graphite, that supply about 36 square inches of surface area to which the bacteria can adhere and pass electrons. The cathode is a carbon/platinum catalyst/proton exchange membrane fused to a plastic support tube.

Logan notes, "I'm optimistic that MFCs may be able to help reduce the $25 billion annual cost of wastewater treatment in the U.S. and provide access to sanitation technologies to countries throughout the world."

The project was supported by a grant from the National Science Foundation to Logan and Tom Mallouk, professor of chemistry, who is Ramnarayanan's adviser.