Large diamonds made from gas are the hardest yet 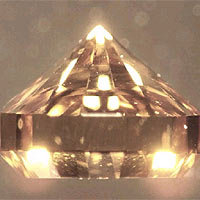 This photograph shows a synthetic brilliant cut single-crystal diamond grown by chemical vapor deposition, CVD. About 2.5 mm high, this crystal was grown in about 1 day at Carnegie. The very bottom (table) of the crystal is a type 1b seed: hence the yellow tint which is due to internal reflection (the CVD diamond is transparent). [C.S. Yan et al., Physica Status Solidi (a) 201,R25 (2004)(PDF 288KB)]. The researchers have also reported that these CVD diamonds are capable of easily generating ultrahigh pressures to at least 200 GPa.[W.L. Mao et al., Appl. Phys. Lett. 83, 5190 (2003)(PDF 288KB)]. Image copyright: Physica Status Solidi.

Producing a material that is harder than natural diamond has been a goal of materials science for decades. Now a group* headed by scientists at the Carnegie Institution’s Geophysical Laboratory in Washington, D.C., has produced gem-sized diamonds that are harder than any other crystals. Further, the researchers grew these diamonds directly from a gas mixture at a rate that is up to 100 times faster than other methods used to date.

"We believe these results are major breakthroughs in our field," said Chih-shiue Yan, lead author of the study published in the February 20, online Physica Status Solidi. "Not only were the diamonds so hard that they broke the measuring equipment, we were able to grow gem-sized crystals in about a day."

The researches grew the crystals using a special high-growth rate chemical vapor deposition (CVD) process that they developed. They then subjected the crystals to high-pressure, high-temperature treatment to further harden the material. In the CVD process, hydrogen gas and methane are bombarded with charged particles, or plasma, in a chamber. The plasma prompts a complex chemical reaction that results in a "carbon rain" that falls on a seed crystal in the chamber. Once on the seed, the carbon atoms arrange themselves in the same crystalline structure as the seed. In this case, the seed was a type 1b synthetic diamond plate. They have grown single crystals of diamonds up to 10 millimeters across and up to 4.5 millimeters in thickness by this method.

The crystals produced by CVD are very tough. "We noticed this when we tried to polish them into brilliant cuts," said Yan. "They were much harder to polish than conventional diamond crystals produced at high pressure and high temperature." The researchers then subjected the tough CVD crystals to high-temperature and high-pressure conditions. The diamonds were heated to 2000° C and put under pressures between 50,000 and 70,000 times atmospheric pressure (5-7 GPa) for ten minutes. This final process resulted in the ultrahard material, which was at least 50% harder than the conventional diamonds as shown by direct measurements carried out in collaboration with scientists at Los Alamos National Laboratory.

"Making diamonds has not been the primary goal of our research," remarked Russell Hemley of Carnegie. "Our group is interested in the behavior of materials at extreme pressures and temperatures. We need large, perfect diamond crystals to create new classes of high-pressure devices for our research and decided to explore whether we could make these crystals by CVD processes. We found that we could, and at a very high growth rate. This has opened up an entirely new way of producing diamond crystals for a variety of applications, such as the next generation diamond-based electronics devices and cutting tools. Our new finding that the diamonds can be supertough and/or superhard was a surprise and will greatly benefit many of these applications."