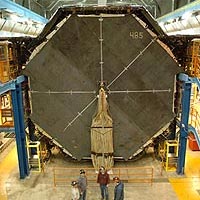 HUGE NEUTRINO DETECTOR – Billions of NuMi-made neutrinos pass through the MINOS Far Detector each day, but only about 10 strike an atomic nucleus inside and are detected. Image courtesy: Argonne National Laboratory.

A new physics experiment combines thousands of tons of steel plates, a powerful particle accelerator and 450 miles of solid rock to reveal the secrets of a particle that sometimes seems to barely exist.

Researchers in Argonne's High Energy Physics Division were instrumental in getting the experiment, called the Main Injector Neutrino Oscillation Search (MINOS), launched in the late 1980s, and later designed and built many of the detector components. By providing the first precise measurements of some of the most fundamental properties of neutrinos, MINOS physicists expect to shed new light on the role these particles played in shaping the universe.

MINOS was built by a collaboration of more than 30 national laboratories, universities and scientific institutions from six nations. Fermi National Accelerator Laboratory (Fermilab) has the lead role. Construction was completed in early 2005, and the experiment is now beginning its initial five-year run.

Argonne's High Energy Physics Division set up “factories” to build the plastic scintillator detector modules at Caltech, the University of Minnesota and Argonne, built much of the “front-end” electronics that receive and record signals from the “near” MINOS detector at Fermilab, and played an important part in installing and commissioning of the detectors.

Neutrinos have no electrical charge. They're produced in vast numbers in some nuclear reactions, such as those that occur in the fusion processes that light the stars. But neutrinos rarely interact with other matter. Neutrinos produced by the sun can, and routinely do, pass through the entire earth without interacting with a single atom.

There are three kinds of neutrinos: electron, muon and tau. The heaviest neutrino could weigh as little as one ten-millionth the mass of an electron.

And neutrinos are constantly changing from one type to another and back again. Every neutrino is actually a quantum-mechanical blend of the three types, or flavors. Over time, the quantum waves that accompany the different flavors get out of step, and an electron neutrino seems to morph into a muon neutrino or a tau neutrino and back again. This “oscillation” provides the best evidence that the particles actually have distinct, non-zero masses.

But the very properties that make neutrinos interesting to physicists make them notoriously difficult to study. If they can pass through the entire earth without interacting with anything, how do you observe them ?

The MINOS experiment plans to create lots of neutrinos, aim them at a big detector, and put lots of distance between the source and detector to give the neutrinos a chance to oscillate.

A specially built beam line at Fermilab produces a beam of nearly pure muon neutrinos that passes through the MINOS Near Detector, located at Fermilab, before traveling to the “Far Detector” 450 miles away in Minnesota. Most of the trip is spent under the State of Wisconsin, at depths up to 10 kilometers. Some of the particles change to tau neutrinos during the trip, and a few are recorded by the detectors. The data may lead to discoveries about the morphing mechanism, better estimates of the masses of each type of neutrino, and much more.

“This will be the first long-baseline neutrino experiment done under controlled conditions with high intensity, so we can actually measure these oscillation parameters precisely,” said David Ayres, who leads Argonne's team of physicists and engineers working on MINOS.

The neutrino production begins with protons picking up energy as they circulate around the Main Injector. A beam of protons, with each particle packing 120 billion electron volts of energy, is extracted from the accelerator and aimed at a graphite target.

“This will be an extremely intense beam,' Ayres said, 'even by Fermilab standards, and we are taking very stringent precautions to contain and monitor the radioactive material that it produces as a byproduct of the process of creating neutrinos.”

The proton beam, a millimeter across, interacts with carbon atoms in a target, a stack of graphite rectangles about three feet long, producing a shower of secondary particles. The beam of secondary particles includes mesons, a family of particles consisting of a quark and an anti-quark. The beam is focused by two magnetic “horns,” trumpet-shaped metal devices driven by 200,000-amp pulses of electric current. The distance between the target and horns can be changed like a zoom lens so that the beam of charged particles created in the target can be “focused.” The design allows the energy of the meson beam, and the resulting neutrino beam, to be changed easily during the experiment's course.

The secondary particles enter a pipe more than 2,000 feet long, where they decay into trillions of neutrinos and other particles. The decay pipe ends in a hadron absorber. This is a stack of water-cooled aluminum and steel blocks and concrete that stop leftover protons and mesons. Behind that lies 240 meters of unexcavated bedrock that absorbs muons. The vast majority of neutrinos blithely pass through these minor obstacles.

Behind the muon absorber is a large cavity 300 feet below the surface containing the MINOS Near Detector, a small-scale version of the MINOS Far Detector. Its 980 tons of steel and scintillator provide a “reference” for unoscillated neutrinos emerging from the NuMI beam. After passing through the near detector, the neutrino beam is about 6 feet in diameter and heading north-northwest at a 3.3-degree angle down into the earth. The 450-mile trips through solid rock takes 0.0025 seconds.

Soudan, Minn., is a small town a few miles from the Boundary Waters Canoe Wilderness Area, and is home to a defunct iron mine a half-mile below ground. The facility is now operated by the State of Minnesota as the Soudan Underground Mine State Park, and provides an easy access for physicists who need a deep underground laboratory to shield their experiment from the rain of cosmic radiation on the Earth's surface.

About 2,450 feet below a hilltop in Soudan a detector hall that is the length of a football field with a 50-foot-high ceiling was excavated for MINOS, using the historic mineshaft and hoisting equipment from the Soudan mine. The far half of the chamber is nearly filled by the MINOS Far Detector.

The detector itself contains more than 6,000 tons of octagonal plates an inch thick and nearly 30 feet across. Each plate was lowered into the mine, in 27-by-6-foot sections, through the mine shaft, then assembled underground and tested by a crew of engineers and technicians. Between each plate is a layer of narrow strips of clear plastic scintillator.

Billions of NuMI-made neutrinos pass through the MINOS Far Detector each day. Of those, only about 10 strike an atomic nucleus inside and are detected. The rest traverse the detector without leaving a trace, exit the earth near the Boundary Waters, and continue on into space.

Each neutrino that interacts in one of the steel detector planes produces a shower of secondary particles. The secondary particles interact with atoms in the scintillator plastic, producing faint flashes of light. Photomultiplier tubes convert that light into pulses of electricity that are sent along to banks of electronics which interpret the signals. Neutrinos coming from the direction of Fermilab will be singled out for further study: how many have changed from muon into tau neutrinos? What do their traces reveal about the oscillation mechanism? Neutrinos coming from other directions may be of cosmic origin and are also of interest to physicists.

An understanding of neutrino physics will shed light on supernovae, the titanic blasts that occur when giant stars run out of fuel and collapse on themselves. These explosions seed the universe with the elements needed to create planets and sustain life. Other answers — and new questions — may arise from the MINOS data.

“We are in new territory. No one has ever done an experiment with a beam like this or a detector like this,” Ayres said, “so there is a chance that our attempt to make precise measurements of neutrino oscillations will turn up something completely unexpected, and even more important than what we set out to study.”

Argonne's High Energy Physics Division is taking a lead role in designing a new, larger detector to take advantage of the NuMI neutrino beam. The detector, called NOvA, would have five times the mass of the MINOS far detector. Also located in northern Minnesota, the detector would be placed “off axis” to the beam — off several miles to one side — where the neutrino beam has a much narrower energy distribution. This will enable a sensitive search for electron neutrinos produced by oscillations of the muon neutrinos from Fermilab. A prototype of one of the 30,000-ton detector's PVC plastic and liquid scintillator planes is under construction at Argonne. If funded, the new detector would take about four years to build.

Also on the drawing boards at Argonne's High Energy Physics Division are new experiments that make use of the neutrinos produced in nuclear reactors to study the oscillation of electron neutrinos. Like NOvA, this experiment hopes to find the last remaining piece of the neutrino oscillation puzzle, which could lead the way to a future study of CP (charge-parity) symmetry violation in neutrinos.