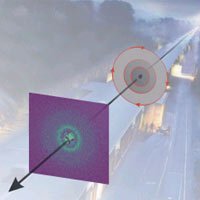 The speed of magnetic recording – a crucial factor in a computer’s power and multimedia capabilities – depends on how fast one can switch a magnet’s poles. An experiment at the Stanford Synchrotron Radiation Laboratory (SSRL) found that the ultimate speed of magnetic switching is at least 1,000 times slower than previously expected. The result, which appears in the April 22 issue of the journal Nature, has implications for future hard disk computer drive technologies.

In the push toward ever-faster magnetic recording, experts expected to find a physical limit, a threshold speed beyond which materials would respond chaotically. “If you had asked me a year ago, ‘How fast does one have to create a pulse that does not switch magnetization?’ my answer would have been one femtosecond (one thousandth of a trillionth of a second),” said Jo Stöhr, Deputy Director of SSRL. “Chaotic behavior was not expected in this experiment, which ran in the picosecond (trillionth-of-a-second) range.”

The SSRL is a division of the Stanford Linear Accelerator Center (SLAC), a U.S. Department of Energy (DOE) research facility operated by Stanford University. The collaboration for the Nature paper was led by SSRL scientists Hans Christof Siegmann and Professor Joachim Stöhr , and included researchers from Seagate Technology, the world’s largest manufacturer of hard disk computer drives.

“This is a fascinating experiment that has given completely new information on the limits of magnetic switching,” said Raymond L. Orbach, director of the DOE Office of Science. “It is also a wonderful illustration of the value of very different disciplines working together: scientists from a synchrotron light source using a high energy physics linear accelerator to do an experiment on magnetism.”

Seagate’s Head of Media Research, Dieter Weller underlined, “This collaboration has evolved, over time, into a very fruitful exchange between academia and industry, Aligning ourselves with such high caliber people as Hans Christof Siegmann and Jo Stöhr is a real feat for us.”

In a computer hard drive, a writing head hovers over a disk that’s rapidly spinning – at up to 15,000 rotations per minute, or 150 times faster than a CD player. An electric current running in the head creates a magnetic field, which records data by turning tiny areas of the disk’s surface into microscopic magnets. The disk is coated with a special, grainy material that allows only two, opposite directions of the magnetization, representing the 0 or 1 of a basic unit of data, or bit. High recording speed requires the coating material to respond and switch its poles quickly enough to record each bit reliably.

The experiment relied on the unique capabilities of SLAC’s 2-mile-long linear accelerator (linac). The beam of electrons produced by the linac played the role of the electric current in a hard drive’s writing head, based on the fact that moving electrons carry along a magnetic field that swirls around the electrons’ path. The idea came to Siegmann in the mid-1990’s, literally out of a lightning bolt: He realized that the linac could magnetically record the same way that a lightning leaves a magnetic signature when it strikes a rock.

The linac’s beam, made of tightly packed bunches of electrons traveling close to light speed, creates magnetic pulses that are some of the world’s strongest – at up to 10 Tesla, or 200,000 times the strength of the Earth’s magnetic field – and briefest, at 2 picoseconds (2 trillionths of a second).

The researchers shot up to seven electron bunches in a row through samples of magnetic recording media. In the photographs of the results, they expected to see dark and light areas, neatly arranged in concentric rings around the focus point of the beam. The two colors would correspond to grains magnetized in either of the two possible directions. Instead, the pictures showed all shades of grey, indicating that some grains had switched while others had not.

They observed similar results with different types of magnetic grains, or even with a continuous magnetic film. With the help of theoretical physicist Alexander Kashuba of the Landau Institute for Theoretical Physics in Moscow, the SSRL researchers realized that their data bore the signature of a chaotic system – one whose parts behave in a random, unpredictable way. “That’s the new thing,” said Siegmann. “It’s like roulette. You can’t tell in advance whether it will be dark or light.”

The challenge now will be to understand why the maximum speed seems to be at least 1,000 times lower than expected. The explanation, Siegmann said, could lie in the way thermal motion interacts with the magnetization process.

The limit on recording speed must be somewhere between 100 billion and a trillion bits per second, but is unlikely to ever affect technology, says Seagate’s Weller. State-of-the-art drives can now record about 1 billion bits per second, and long before that speed can be increased 100-fold, other physical constraints will get in the way, he says. In particular, higher speed requires smaller magnetic grains, but their size cannot go below the size of atoms.

The SSRL result could be an important step toward understanding the basic physics of data recording, leading to the development of entirely new technologies. A promising idea, Weller says, is heat-assisted recording, where a small section of the recording medium is temporarily brought to a high temperature, to speed up its magnetization reversal.

With the help of SLAC’s new Linac Coherent Light Source (LCLS), scheduled to start operating in 2008, researchers will be able to gain a solid understanding of the magnetic properties of matter. The LCLS will use the linac’s electron beam to produce laser-like X-ray pulses lasting just one femtosecond, enabling researchers to take snapshots of the magnetization process. “We will take images observing not only what has happened,” said Stöhr. “We will be able to see those processes while they happen.”