A Conveyor Belt for the Nano-Age 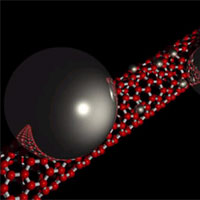 In a development that brings the promise of mass production to nanoscale devices, Lawrence Berkeley National Laboratory scientists have transformed carbon nanotubes into conveyor belts capable of ferrying atom-sized particles to microscopic worksites.

By applying a small electrical current to a carbon nanotube, they moved indium particles along the tube like auto parts on an assembly line. Their research, described in the April 29 issue of Nature, lays the groundwork for the high-throughput construction of atomic-scale optical, electronic, and mechanical devices that will power the burgeoning field of nanotechnology.

“We’re not transporting atoms one at a time anymore — it’s more like a hose,” says Chris Regan of Berkeley Lab’s Materials Sciences Division, who co-authored the article along with fellow Materials Sciences researchers Shaul Aloni, Ulrich Dahmen, Robert Ritchie, and Alex Zettl. Aloni, Regan, and Zettl are also scientists in the University of California at Berkeley’s Department of Physics, where much of the work was conducted.

The ability to shuttle a stream of particles to precise locations fills a void that has stymied the efficient assembly of nanostructures. For years, scientists have been able to simultaneously deliver millions of atoms to millions of sites simply by mixing chemicals. Although this fast technique has grown quite sophisticated, it remains far too blunt to build atomic-scale devices. On the other end of the spectrum is the ability to manipulate individual atoms, a feat that came of age in 1990 when IBM researchers spelled out the company logo by positioning 35 xenon atoms with a scanning tunneling microscope. Although precise, this technique is painstakingly slow, with no way to swiftly deliver atoms to the work area.

“It’s either all at once, or excruciatingly serial,” says Regan. “So we combined incredibly precise localization with something that has higher throughput.”

This middle ground is made possible by carbon nanotubes, which are hollow cylinders of pure carbon about ten thousand times smaller than the diameter of a human hair. Since their discovery in the sooty residue of vaporized carbon rods, these incredibly strong and versatile macromolecules have been engineered into frictionless bearings, telescoping rods, and the world's smallest room-temperature diodes. Now, they’re poised to change the way these and other devices are constructed.

As described in their Nature article, the research team thermally evaporated indium metal onto a bundle of carbon nanotubes. The amount of evaporated metal is so small it populates the tubes’ surfaces as isolated indium crystals, instead of uniformly coating them. The bundle is then placed inside a transmission electron microscope, where a tungsten tip mounted on the end of a nanomanipulator approaches one nanotube. After physical contact is made between the tip and the free end of the nanotube, voltage is applied between the tip and the other end of the nanotube, creating a circuit. This sends an electrical current through the nanotube, which generates thermal energy that heats the indium particles.

Next, if the voltage and thermal energy is carefully controlled, something strange occurs. Real-time video of the nanotube’s surface captures an indium particle as it disappears, while the particle to its right grows. Several seconds later, that newly enlarged particle also disappears, replaced by another even further to the right. Like squeezing the last bits of toothpaste from a tube, particles to the left become smaller while those to the right grow.

In this manner, the thermally driven indium atoms inchworm along the nanotube, momentarily occupying a reservoir where a particle is located, and then moving to the next, until all of the indium piles up at the end of the nanotube. In the future, this nano-sized conveyor belt could be aimed anywhere scientists want to deliver mass atom-by-atom — the makings of a formidable nanoassembly tool. Moreover, if the voltage is slightly increased, the indium’s temperature increases, and the metal moves from left to right more quickly.

“It’s the equivalent of turning a knob with my hand and taking macroscale control of nanoscale mass transport,” Regan says. “And it’s reversible: we can change the current’s polarity and drive the indium back to its original position.”

In other words, indium can be repeatedly moved back and forth along the nanotube without losing a single atom. Nothing is lost in transit. This conservation of mass occurs because the atoms don’t evaporate from the system during their journey — an advantage in any process meant to deliver valuable material to a worksite. Instead, the atoms hug the nanotube’s surface as they move, tethered by a process called surface diffusion.

“In order to build a structure we have to be able transport material to the construction site, and we’re developing a better way to do that,” Regan says. “Our nanoscale mass delivery system is simple and reversible. It requires only a nanotube, a voltage source, and something to transport.”