Proof of new state of matter is in the jelly 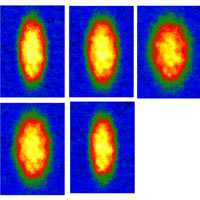 By observing the way their soup of lithium-6 atoms jiggled at ultra-cold temperatures, NASA-funded researchers hit upon the first direct evidence for a frictionless fluid made up of fermion atoms. This series of pictures shows the fermion atom superfluid oscillating inside a laser beam trap (from left to right, from top to bottom).

In the community of very tiny particles that make up all matter in the universe, there are two main citizens: bosons and fermions. Bosons are socially oriented and tend to stick together, while fermions are solitary entities, preferring to go it alone.

That's why NASA-funded researchers overcame an important technical challenge when they recently persuaded reclusive fermion atoms to act like their friendly boson buddies and jiggle together in an ultra-cold, jelly-like state of matter.

The findings, published in the online version of Physical Review Letters, represent the first direct evidence for a fermion atom superfluid – a frictionless fluid made up of a gas of fermion atoms. Such bizarre atomic soups will help physicists understand how matter behaves at its most fundamental level, and will serve as models for exotic systems in nature, such as neutron stars and new super- high- temperature superconductors that could potentially function at thousands of degrees Celsius.

"When you build airplanes, you begin with small-scale models. The same idea can be applied to very high-temperature superconductors, only the models are fermionic superfluid gases," said Dr. John Thomas, a physics professor at Duke University, Durham, North Carolina, and principal investigator for the new study. His research is funded by a grant from NASA's Office of Biological and Physical Research, Washington, through the Jet Propulsion Laboratory, Pasadena, Calif.

Superconductors are materials that permit electrical currents to flow without resistance. They have potential applications in the computer, power and transportation industries. Rail system designers imagine using superconductors to build magnetically levitated trains. But current superconductors require impractically cold temperatures to work. Fermionic superfluid gases — the atomic equivalent of superconducting electrons — might serve as rudimentary blueprints for creating superconductors that work at much higher temperatures.

The latest research builds on previous work by the Duke University team outlining the creation of a possible fermion atom superfluid. In that paper, reported in Science Magazine in 2002, the researchers used an "optical bowl" made of a focused laser beam to trap lithium- 6 atoms (fermions) into a cigar-shaped cloud. They then chilled their concoction to less than a millionth of a degree above absolute zero, a temperature just above the point where no more cooling can occur, and applied a small magnetic field.

The result was a transformation in character; the normally antisocial atoms stacked up like peas in a pod and exhibited unusual behavior. For instance, the gas expanded in one direction while standing still in another when released from the bowl. Nonetheless, the researchers could not find direct evidence that what they were seeing was an actual superfluid — until now.

This time the researchers repeated the experiment at different temperatures and then observed how long the fermionic gas jiggled, or oscillated, after they switched the optical trap off and on, essentially giving the gas a light tap. In a normal gas, collisions between atoms should decrease as the temperature goes down, producing an imperfect jelly whose oscillations die out quickly. In a superfluid, the atoms act even more unified when temperatures are lowered, and the oscillations should theoretically last forever. What the team discovered was a jelly-like gas that wobbled for increasingly longer times as the temperature decreased -- the first direct signs of a fermion atom superfluid and the beginnings of a new model for exploring the possibility of extremely high- temperature superconductors.