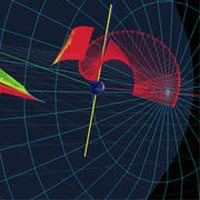 After some 400 years of relative stability, Earth's North Magnetic Pole has moved nearly 1,100 kilometers out into the Arctic Ocean during the last century and at its present rate could move from northern Canada to Siberia within the next half-century.

After some 400 years of relative stability, Earth's North Magnetic Pole has moved nearly 1,100 kilometers out into the Arctic Ocean during the last century and at its present rate could move from northern Canada to Siberia within the next half-century.

If that happens, Alaska may be in danger of losing one of its most stunning natural phenomena - the Northern Lights.

But the surprisingly rapid movement of the magnetic pole doesn't necessarily mean that our planet is going through a large-scale change that would result in the reversal of the Earth's magnetic field, Oregon State University paleomagnetist Joseph Stoner reported today at the annual meeting of the American Geophysical Union in San Francisco, Calif.

'This may be part of a normal oscillation and it will eventually migrate back toward Canada,' said Stoner, an assistant professor in OSU's College of Oceanic and Atmospheric Sciences. 'There is a lot of variability in its movement.'

Calculations of the North Magnetic Pole's location from historical records goes back only about 400 years, while polar observations trace back to John Ross in 1838 at the west coast of Boothia Peninsula. To track its history beyond that, scientists have to dig into the Earth to look for clues.

Stoner and his colleagues have examined the sediment record from several Arctic lakes. These sediments - magnetic particles called magnetite - record the Earth's magnetic field at the time they were deposited. Using carbon dating and other technologies - including layer counting - the scientists can determine approximately when the sediments were deposited and track changes in the magnetic field.

The Earth last went through a magnetic reversal some 780,000 years ago. These episodic reversals, in which south becomes north and vice versa, take thousands of years and are the result of complex changes in the Earth's outer core. Liquid iron within the core generates the magnetic field that blankets the planet.

Because of that field, a compass reading of north in Oregon will be approximately 17 degrees east from 'true geographic north.' In Florida, farther away and more in line with the poles, the declination is only 4-5 degrees west.

The Northern Lights, which are triggered by the sun and fixed in position by the magnetic field, drift with the movement of the North Magnetic Pole and may soon be visible in more southerly parts of Siberia and Europe - and less so in northern Canada and Alaska.

In their research, funded by the National Science Foundation, Stoner and his colleagues took core samples from several lakes, but focused on Sawtooth Lake and Murray Lake on Ellesmere Island in the Canadian Arctic. These lakes, about 40 to 80 meters deep, are covered by 2-3 meters of ice. The researchers drill through the ice, extend their corer down through the water, and retrieve sediment cores about five meters deep from the bottom of the lakes.

The 5-meter core samples provide sediments deposited up to about 5,000 years ago. Below that is bedrock, scoured clean by ice about 7,000 to 8,000 years ago.

'The conditions there give us nice age control,' Stoner said. 'One of the problems with tracking the movement of the North Magnetic Pole has been tying the changes in the magnetic field to time. There just hasn't been very good time constraint. But these sediments provide a reliable and reasonably tight timeline, having consistently been laid down at the rate of about one millimeter a year in annual layers.

'We're trying to get the chronology down to a decadal scale or better.'

What their research has told Stoner and his colleagues is that the North Magnetic Pole has moved all over the place over the last few thousand years. In general, it moves back and forth between northern Canada and Siberia. But it also can veer sideways.

'There is a lot of variability in the polar motion,' Stoner pointed out, 'but it isn't something that occurs often. There appears to be a 'jerk' of the magnetic field that takes place every 500 years or so. The bottom line is that geomagnetic changes can be a lot more abrupt than we ever thought.'

Shifts in the North Magnetic Pole are of interest beyond the scientific community. Radiation influx is associated with the magnetic field, and charged particles streaming down through the atmosphere can affect airplane flights and telecommunications.