Researchers Catch Motion of a Single Electron on Video 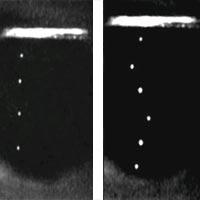 Captured on a home video camera, some electrons follow a straight path through superfluid helium (far left). Those entrained in a superfluid vortex follow a snakelike path.

The images, which were published online on April 28, 2007, in the Journal of Low Temperature Physics, show scattered points of light moving down the screen – some in straight lines, some following a snakelike path. The Matrix it’s not. Still, the fact that they can be seen at all is astounding. “We were astonished when we first saw an electron moving across the screen,” said Humphrey Maris, a professor of physics at Brown University. “Once we had the idea, setting it up was surprisingly easy.”

Maris and Wei Guo, a doctoral student, took advantage of the bubbles that form around electrons in supercold liquid helium. Using sound waves to expand the bubbles and a coordinated strobe light to illuminate them, Guo was able to catch their movements on a home video camera.

A free electron repels the atoms that surround it, creating a small space, or bubble, around itself. In conventional liquids, the bubble shrinks to nothing because the surface tension of the liquid works against the repulsive force. Superfluid helium has very little surface tension, so the bubble can become much larger. The two opposing forces balance when the diameter of the bubble is about 40 angstroms – still far to tiny to see.

The researchers used a planar transducer – basically, a loudspeaker that produces flat, not focused, sound waves – to pummel the whole volume of liquid helium with sound. As each wave overtook an electron bubble, it alternately increased and decreased the surrounding pressure. Under negative pressure, the bubbles expanded to about eight microns, the size of a small speck of dust, then shrank again as the next wave of high pressure washed over them. A strobe light, synchronized to the sound pulse, illuminated the bubbles without overheating the chamber.

Running a camcorder in “super night mode,” Guo and Maris were able to record the approximately 2,000 photons they estimate were scattered by the expanded bubbles, producing a series of electron-bubble images on each frame of videotape.

“The results are very original and really spectacular,” said Sébastien Balibar, research director for physics at l’Ecole Normale Supérieure in Paris, “imaging single vortices of atomic size with a sound wave is an astonishing achievement.”

To be sure they were seeing electron bubbles and not just trapped dust, the researchers gradually increased the power to the transducer. They detected no points of light at low power and then a rapid increase in the appearance of bubbles at a particular voltage, just as their calculations predicted. Dust particles would exhibit no such threshold.

The researchers had planned to introduce streams of electrons into the chamber from a radioactive source, but found that even without a source, a number of electrons could be seen moving through the chamber. Most traveled in a fairly straight line leading away from the transducer, which produces a flow of heat down through the liquid.

A few of the electrons, however, followed a distinctly different snakelike path. Maris and Guo hypothesize that those electrons are following the lines of superfluid vortices – a phenomenon akin to a tornado in which the liquid spins at high velocity around a line. “The vortex is like a piece of string running through the liquid,” said Maris. “The electron bubble is attracted to the core of the vortex and gets attached to it. It’s as though it’s sliding down this rope that winds through the fluid.” By following the path that the electron takes as it slides along the vortex, the researchers were able to observe vortex lines for the first time. “People never thought it would be possible to visualize the vortex lines,” said Guo, “but then, almost by accident, we saw them.”