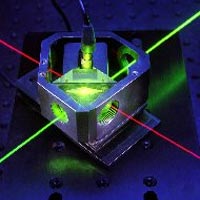 It may be surprising that a laser beam, when shot to the moon and returned by one of the mirrors the Apollo astronauts left behind, is a couple of miles in diameter at the end of its half-million-mile round trip. This spread is mostly due to atmospheric distortions, but it nonetheless underscores the problems posed to those who wish to keep laser beams from diverging or focusing to a point as light travels through a medium.

Now a team of physicists, mathematicians, and electrical engineers from the California Institute of Technology and the University of Massachusetts at Amherst has figured out a trick to keep light pulses from diverging or focusing. Using a multi-layer sandwich of glass plates alternating with air, the scientists have provided the first experimental demonstration of a procedure called 'nonlinearity management.' This technique wouldn't do anything for light traveling all the way to the moon, but could be useful in future generations of devices involving optical switching and optical information processing, for which precise control of laser pulses will be advantageous.

Reporting in the July 21, 2006, issue of Physical Review Letters, the researchers demonstrate that a laser beam passing through multiple layers of glass and air can be made to last much longer than if it had passed through only one type of medium. This procedure exploits a phenomenon known as the 'Kerr effect,' which causes the refractive index of an individual material to change if the light energy is sufficiently intense.

When light is propagated only through glass, one obtains a focused beam so intense that it generates a plasma in the medium, stripping away its electrons. Using a multi-layer 'Kerr sandwich' of light and air, however, keeps the plasma from being created because the different refractive indices of the media cause the light beam to diverge and converge several times.

'The idea is for the beam size on average to stay constant,' says team member Mason Porter, a postdoctoral scholar in Caltech's Center for the Physics of Information.

The experimental setup was the work of Martin Centurion, also a postdoctoral researcher in the Center for the Physics of Information. According to Centurion, the laboratory apparatus consists of nine normal microscope slides, each about one millimeter thick, that are aligned parallel to each other at one-millimeter spacings. An intense femtosecond laser pulse is sent into the slides, and the pulse converges while in the glass medium, but then diverges again while traversing through air. The end result is a beam that is the same diameter when it emerges from the apparatus as it was when it entered, although it is slightly weaker due to reflection of a fraction of the energy at each interface.

The researchers say that the setup they used is intended to demonstrate that nonlinearity management can be performed, and it is not by any means the final version of a practical apparatus.

'This is focusing in space,' Porter says. 'If you could combine both space and time, you'd have a 'light bullet'-that is, a pulse that stays the same all the time.'

Various devices in the future could be possible through nonlinearity management, adds Centurion, 'but this is a demonstration that is pretty far from any applications.'

'There are potential applications of the tight beams provided by the technique such as optical lithography and sensors,' says Demetri Psaltis, the Myers Professor of Electrical Engineering at Caltech and another author of the paper.

The other author is Panayotis Kevrekidis, an associate professor of mathematics at the University of Massachusetts at Amherst.

The title of the paper is 'Nonlinearity Management in Optics: Experiment, Theory, and Simulation.'