A Mathematical Solution for Another Dimension 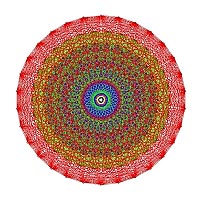 Ever since 1887, when Norwegian mathematician Sophus Lie discovered the mathematical group called E8, researchers have been trying to understand the extraordinarily complex object described by a numerical matrix of more than 400,000 rows and columns.

Now, an international team of experts using powerful computers and programming techniques has mapped E8--a feat numerically akin to the mapping of the human genome--allowing for breakthroughs in a wide range of problems in geometry, number theory and the physics of string theory.

'Although mapping the human genome was of fundamental importance in biology, it doesn't instantly give you a miracle drug or a cure for cancer' said mathematician Jeffrey Adams, project leader and mathematics professor at the University of Maryland. 'This research is similar: it is critical basic research, but its implications may not become known for many years.'

Team member David Vogan, a professor of mathematics at the Massachusetts Institute of Technology (MIT), presented the findings today at MIT.

The effort to map E8 is part of a larger project to map out all of the Lie groups--mathematical descriptions of symmetry for continuous objects like cones, spheres and their higher-dimensional counterparts. Many of the groups are well understood; E8 is the most complex.

The project is funded by the National Science Foundation (NSF) through the American Institute of Mathematics.

It is fairly easy to understand the symmetry of a square, for example. The group has only two components, the mirror images across the diagonals and the mirror images that result when the square is cut in half midway through any of its sides. The symmetries form a group with only those 2 degrees of freedom, or dimensions, as members.

A continuous symmetrical object like a sphere is 2-dimensional on its surface, for it takes only two coordinates (latitude and longitude on the Earth) to define a location. But in space, it can be rotated about three axes (an x-axis, y-axis and z-axis), so the symmetry group has three dimensions.

In that context, E8 strains the imagination. The symmetries represent a 57-dimensional solid (it would take 57 coordinates to define a location), and the group of symmetries has a whopping 248 dimensions.

Because of its size and complexity, the E8 calculation ultimately took about 77 hours on the supercomputer Sage and created a file 60 gigabytes in size. For comparison, the human genome is less than a gigabyte in size. In fact, if written out on paper in a small font, the E8 answer would cover an area the size of Manhattan.

While even consumer hard drives can store that much data, the computer had to have continuous access to tens of gigabytes of data in its random access memory (the RAM in a personal computer), something far beyond that of home computers and unavailable in any computer until recently.

The computation was sophisticated and demanded experts with a range of experiences who could develop both new mathematical techniques and new programming methods. Yet despite numerous computer crashes, both for hardware and software problems, at 9 a.m. on Jan. 8, 2007, the calculation of E8 was complete.