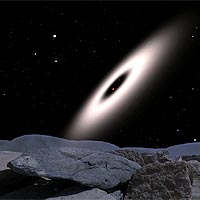 Astronomers were surprised to discover a 25-million-year-old protoplanetary disk around a pair of red dwarf stars 350 light-years away. Gravitational stirring by the binary star system (shown in this artist's conception) may have prevented planet formation. Credit: David A. Aguilar (CfA)

Every rule has an exception. One rule in astronomy, supported by considerable evidence, states that dust disks around newborn stars disappear in a few million years. Most likely, they vanish because the material has collected into full-sized planets. Astronomers have discovered the first exception to this rule - a 25-million-year-old dust disk that shows no evidence of planet formation.

'Finding this disk is as unexpected as locating a 200-year-old person,' said astronomer Lee Hartmann of the Harvard-Smithsonian Center for Astrophysics (CfA), lead author on the paper announcing the find.

The discovery raises the puzzling question of why this disk has not formed planets despite its advanced age. Most protoplanetary disks last only a few million years, while the oldest previously known disks have ages of about 10 million years.

'We don't know why this disk has lasted so long, because we don't know what makes the planetary formation process start,' said co-author Nuria Calvet of CfA.

The disk in question orbits a pair of red dwarf stars in the Stephenson 34 system, located approximately 350 light-years away in the constellation Taurus. Data from NASA's Spitzer Space Telescope shows that its inner edge is located about 65 million miles from the binary stars. The disk extends to a distance of at least 650 million miles. Additional material may orbit farther out where temperatures are too low for Spitzer to detect it.

Astronomers estimate the newfound disk to be about 25 million years old. They calculated the age by modeling the central stars within the system, since stars and disk share the same age. The appearance of the disk itself also supports an advanced age.

Hartmann and Calvet hold opposite opinions about the eventual fate of the disk around Stephenson 34.

'Most stars, by the age of 10 million years, have done whatever they're going to do,' said Hartmann. 'If it hasn't made planets by now, it probably never will.'

Calvet disagreed. 'This disk still has a lot of gas in it, so it may still form giant planets.'

Both astronomers emphasize that such debates are a natural part of the scientific process.

'Some people expect scientists to have all the answers. But research is all about exploring the edge of what is known,' said Hartmann. 'That's what makes it so exciting!'

In the future, Hartmann and Calvet plan to search for more old disks in order to learn why some disks survive so much longer than most others.

'It's important to find more objects like this because they give us clues about the conditions that influence the formation of planets,' said Calvet.

This research will be published in The Astrophysical Journal Letters.