New hybrid material has potential use in microelectronics 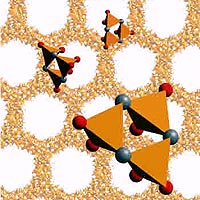 A depiction of a molecular self-assembly of periodic mesoporous organosilicas containing interconnected [Si(CH2)]3 building units. The larger figure in the foreground shows the ring-like structure of an individual [Si(CH2)]3 unit. (Image: Geoffrey Ozin, U of T)

U of T scientists have developed a new class of hybrid materials combining organic and inorganic elements that could lead to improved computer chips, among other applications.

The computer industry is faced with a conundrum: as chip components become smaller and faster, the increased electrical resistance and capacitance they generate ultimately slows performance. The silica that insulates individual components becomes less effective as chip components shrink in size. A new material developed in the lab of University Professor Geoffrey Ozin of U of T's chemistry department may help address this problem, pushing computers to even faster performance. The material is a porous solid that assembles itself at the molecular level and displays superior insulating properties to silica; it is categorized as a nanocomposite because the nanoscale pore size of its honeycomb-like structure is so tiny, measuring in the billionths of a metre in diameter and organic and inorganic parts are integrated into a composite structure.

"I'd like to make thin films of this material, ultimately for use in microelectronics, for example as packaging material," says Ozin, a Canada Research Chair in Materials Chemistry. Preliminary tests have shown the new material has promising insulating ability; researchers are now testing it on actual computer chips.

A paper in the Oct. 10 issue of the journal Science describes how the research team developed the material by chemically combining silicon, an inorganic element, with an organic, methylene, in a one-to-one ratio. The resulting hybrid material - called a three-ring periodic mesoporous organosilica (PMO) - incorporates an unprecedented level of organic components in its structure compared to earlier nanocomposites, which reached an inorganic-organic ratio of only three to one.

Boosting the organic component increases scientists' ability to exploit the function - for example, insulating ability - of that organic, says Kai Landskron, a post-doctoral fellow in the Ozin lab and first author on the Science paper. The one-to-one ratio of organic to inorganic components is the first time this structural feature has been observed in a porous organic-inorganic hybrid material that has a regular array of single size pores, he says.

"As the organic function is the carrier of the desired material's properties, the technological impact of this discovery is expected to be profoundly important for scientists in various disciplines," says Landskron.

Boosting the organic component also gives scientists more options when it comes to manipulating the hybrid material's mechanical features, such as the ability to control how the material responds under stress and strain and how stiff or flexible it is, says Professor Doug Perovic, co-author and chair of U of T's Department of Materials Science and Engineering.

The inorganic component gives the necessary rigidity to the molecular structure that makes the material useable. This research shows that the three-ring PMO structure has enough resilience, even with the increased organic content (typically softer than inorganics), to maintain the stability of the molecular assembly, says Ozin, senior author on the paper.

He believes the potential applications of this new class of self-assembling nanocomposites could impact a broad range of problems because simply changing the organic group from methylene to another organic with a different function could result in a material with an entirely different use. "Here's a new class of materials that has three silicons and three methylene groups as a basic building block," he says. "There's a whole family of potential new materials that could grow from that, just by using chemistry to change the organic group."

News Story Origin and Copyright: UToronto
Click here for the original news release.
'Where the telescope ends, the microscope begins. Which of the two has the grander view?'