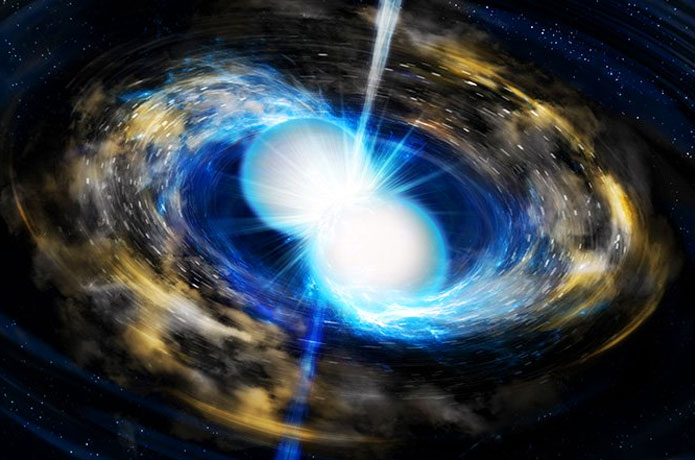 A group of researchers has, for the first time, identified rare earth elements produced by neutron star mergers.

Details of this milestone were published in The Astrophysical Journal on October 26, 2022.

When two neutron stars spiral inwards and merge, the resulting explosion produces a large amount of heavy elements that make up our Universe. The first confirmed example of this process was an event in 2017 named GW 170817. Yet, even five years later, identifying the specific elements created in neutron star mergers has eluded scientists, except for strontium identified in the optical spectra.

A research group led by Nanae Domoto, a graduate student at the Graduate School of Science at Tohoku University and a research fellow at the Japan Society for the Promotion of Science (JSPS), has systematically studied the properties of all heavy elements to decode the spectra from neutron star mergers.

They used this to investigate the spectra of kilonova - bright emissions caused by the radioactive decay of freshly synthesized nuclei that are ejected during the merger - from GW 170817. Based on comparisons of detailed kilonovae spectra simulations, produced by the supercomputer "ATERUI II" at the National Astronomical Observatory of Japan, the team found that the rare elements lanthanum and cerium can reproduce the near-infrared spectral features seen in 2017.

Until now, the existence of rare earth elements has only been hypothesized based on the overall evolution of the kilonova's brightness, but not from the spectral features.

"This is the first direct identification of rare elements in the spectra of neutron star mergers, and it advances our understanding of the origin of elements in the Universe," Dotomo said.

"This study used a simple model of ejected material. Looking ahead, we want to factor in multi-dimensional structures to grasp a bigger picture of what happens when stars collide," Dotomo added.