Saturn’s Outer Rings May Be Eroding 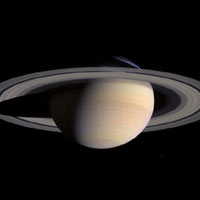 A massive eruption of atomic oxygen from Saturn’s outer rings, seen by Cassini’s ultraviolet camera as the spacecraft neared its destination, may be an indication that the planet’s wispy E ring is eroding so fast that it could disappear within 100 million years if not replenished.

Cassini’s Ultraviolet Imaging Spectrograph (UVIS) detected the oxygen atoms spewing into a huge cloud on the dark side of Saturn’s rings as Cassini prepared to enter orbit around Saturn in January 2004, said Donald Shemansky, professor of aerospace and mechanical engineering in the USC Viterbi School of Engineering.

Data indicated that about 275 million pounds (125 million kilograms) of oxygen was abruptly released in a short period of time.

“This was our first surprise in the ultraviolet,” said Shemansky, who will analyze ultraviolet data during Cassini’s four-year tour of Saturn and its rings with Janet Hallett, a postdoctoral aerospace research associate in the USC Viterbi School.

“We aren’t sure yet whether this was a transient event or part of a routine recycling process in Saturn’s magnetosphere,” he said.

“Right now scientists are speculating that the oxygen eruption may have been caused by a collision of ice particles from the planet’s distant E ring with material in one of the main ring systems, A, B or C. Or it could have been a meteorite collision or an eruption of icy slush on Enceladus, a moon that orbits in the E ring.”

Shemansky, a co-investigator on the 16-member Cassini ultraviolet imaging team, reported their findings in the Dec. 16 issue of Science Express .

Despite Saturn’s placid appearance from Earth, the planet is anything but that.

Saturn, its moons and highly structured rings live inside a huge cavity in the solar wind created by the planet’s strong magnetic field.

The magnetosphere is a bubble of particles including electrons, various species of ions, neutral atoms and molecules, several populations of very energetic charged particles like those found in Earth’s Van Allen Belts, and charged dust grains.

The ionized (electrically charged) gases are called plasmas. However, unlike Jupiter’s magnetosphere, Shemansky said Saturn’s magnetic cocoon, which is smaller, is filled primarily with neutral gas rather than ions.

“Saturn’s magnetosphere is turning out to be very different from Jupiter’s,” he said. “It’s dominated by neutral gas and water-rich ingredients produced by its rings, as icy moon debris collides, or by the more energetic collisions of incoming meteorites. It doesn’t have nearly as many charged particles, and many of them are absorbed by the rings, so the plasma processes we are observing are entirely different.”

Two months after his initial observations, Shemansky and his ultraviolet team reported that the large cloud of escaping oxygen atoms had dissipated just as rapidly as it had appeared.

Shemansky discounted theories that the rapid loss of material could be explained by “satellite sweeping,” a process whereby tiny shepherding moons gobble up debris or deflect it as they clean out gaps between the rings.

“The rate at which we saw material escaping from Saturn’s outer rings implies that mass equivalent to the entire E ring, even including larger fragments and parent bodies, would be consumed in a period of about 100 million years if no replenishment processes are at work,” he said.

The rings of gas giants are made up of rocky debris from moons that have been torn apart by tidal waves or by an asteroid or comet collision during heavy bombardment periods.

Rings are considered ephemeral and thought to disappear over time spans of billions of years.

But Saturn’s colorful rings appear to be younger than the planet itself, said scientists – perhaps only 100 million years old, which is young in cosmological time.

They also suspect that Saturn has had several ring systems in its history, although they have never had direct evidence on which to base their assumptions.

“These observations are a first in solar system exploration,” Shemansky said. “We have direct evidence now that the rings are made up of pure ice and that they are shaped by processes that happen fast,” he added. “They aren’t the same processes that shaped our solar system 4.5 billion years ago.

“Given the fact that the outer rings are present at this time means that the system is being replenished by interactive plasma processes,” Shemansky continued. “Clearly, the fact that something is eating up micron-sized grains in the outer ring zones at a high rate tells us that some sort of recycling process must be going on to rebuild them.”

Cassini’s UV imaging spectrograph has made other significant observations.

In the ultraviolet, scientists were able to see dust on the rings. Data showed variations in the amount of water-ice contained in the surfaces of ring particles, suggesting that darkened portions had been dusted with powder from pulverized moons or incoming meteoroids.

The Cassini UVIS team also obtained ultraviolet images of Phoebe, Saturn’s most distant large moon, during the inbound flight to Saturn. Data showed the absorption lines of water-ice on Phoebe’s dark surface, which gave scientists more clues about its origins.

The only moon in the Saturnian system to orbit in a retrograde, or backward, direction, Phoebe is similar to a common C-type carbonaceous asteroid.

Scientists theorize that it was flung out of the Kuiper Belt, a region well beyond Neptune’s orbit where thousands of small, icy comets reside, and sucked up by Saturn’s strong gravitational field, but no one is absolutely sure of its origin.

The Cassini-Huygens spacecraft and science instruments are part of an international mission by NASA, the European Space Agency and the Italian Space Agency to explore Saturn and its many moons and rings.