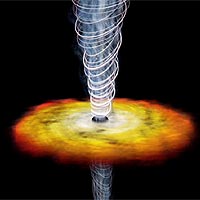 Here is an artist's conception of the collimated jet of energy being shot out above and below a black hole located in the center (nucleus) of a galaxy. The black hole is gravitationally pulling in (accreting) large amounts of available material from a flattened 'accretion disk' of matter. Why the jets form isn't completely clear, but astronomers believe it has to do with the violent twisting of magnetic field lines (represented white spirals in the image) caused by superheated material swirling into the black hole. From a great distance (across billions of light years), this 'active galactic nucleus' would appear as a quasar.

A quasar is a category of object located hundreds of millions to billions of light years away (almost to the edge of the observable Universe!) that astronomers believe are powered by enormous black holes residing in the centers of many galaxies. Quasars emit tremendous amounts of electromagnetic energy, including radio waves, visible light and X-rays (depending on the quasar), with the energy collimated (channeled) into a narrow jet. A blazar refers to those quasars whose jets happen by chance alignment to be pointed directly in Earth's direction. In the same way that a flashlight shone directly into your eyes looks very bright, even if the bulb doesn't have a particularly high wattage, the light from blazars appears in the form of gamma-rays, the most energetic form of light.

Scientists say that Albert Einstein's principle of the constancy of the speed of light holds up under extremely tight scrutiny, a finding that rules out certain theories predicting extra dimensions and a 'frothy' fabric of space.

The finding also demonstrates that basic ground- and space-based observations of the highest-energy gamma-rays, a form of electromagnetic energy like light, can provide insight into the very nature of time, matter, energy and space at scales extremely far below the subatomic level -- something that few scientists thought possible.

Dr. Floyd Stecker of NASA's Goddard Space Flight Center in Greenbelt, Md., discusses the implications of these findings in a recent issue of Astroparticle Physics. His work is based partly on an earlier collaboration with Nobel laureate Sheldon Glashow of Boston University.

'What Einstein worked out with pencil and paper nearly a century ago continues to hold up to scientific scrutiny,' said Stecker. 'High-energy observations of cosmic gamma rays don't rule out the possibility of extra dimensions and the concept of quantum gravity, but they do place some strict constraints on how scientists can go about finding such phenomena.'

Einstein stated that space and time were actually two aspects of a single entity called spacetime, a four-dimensional concept. This is the foundation to his theories of special and general relativity. For example, general relativity posits that the force of gravity is the result of mass distorting spacetime, like a bowling ball on a mattress.

General relativity is the theory of gravity on a large scale, while quantum mechanics, developed independently in the early 20th century, is the theory of the atom and subatomic particles on a very small scale. Theories based on quantum mechanics do not describe gravity, but rather the other three fundamental forces: electromagnetism (light), strong forces (binding atomic nuclei), and weak forces (seen in radioactivity).

Scientists have long hoped to meld these theories into one 'theory of everything' to describe all aspects of nature. These unifying theories -- such as quantum gravity or string theory -- may involve the invocation of extra dimensions of space and also violations of Einstein's special theory of relativity, such as the speed of light being the maximum attainable velocity for all objects.

Stecker's work involves concepts called the uncertainty principle and Lorentz invariance. The uncertainty principle, derived from quantum mechanics, implies that at the subatomic level virtual particles, also called quantum fluctuations, pop in and out of existence. Many scientists say that spacetime itself is made up of quantum fluctuations which, when viewed up close, resemble a froth or 'quantum foam.' Some scientists think a quantum foam of spacetime can slow the passage of light -- much as light travels at a maximum speed in a vacuum but at slower speeds through air or water.

The foam would slow higher-energy electromagnetic particles, or photons -- such as X rays and gamma rays -- more than lower energy photons of visible light or radio waves. Such a fundamental variation in the speed of light, different for photons of different energies, would violate Lorentz invariance, the basic principle of the special theory of relativity. Such a violation could be a clue that would help point us on the road to unification theories.

Scientists have hoped to find such Lorentz invariance violations by studying gamma rays coming from far outside the Galaxy. A gamma-ray burst, for example, is at such a great distance that the differences in the speeds of photons in the burst, depending on their energy, might be measurable -- as the quantum foam of space may act to slow light which has been traveling to us for billions of years.

Stecker looked much closer to home to find that Lorentz invariance is not being violated. He analyzed gamma rays from two relatively nearby galaxies about half a billion light years away with supermassive black holes at their centers, named Markarian (Mkn) 421 and Mkn 501. These black holes generate intense beams of gamma-ray photons that are aimed directly at the Earth. Such galaxies are called blazars. (Refer to Image 4 for a picture of Mkn 421. Images 1 - 3 are artist's concepts of supermassive black holes powering quasars which, when pointed directly at Earth, are called blazars. Image 5 is a Hubble Space Telescope photo of a blazar.)

Some of the gamma rays from Mkn 421 and Mkn 501 collide with infrared photons in the Universe. These collisions result in the destruction of the gamma rays and infrared photons as their energy is converted into mass in the form of electrons and positively charged antimatter-electrons (called positrons), according to Einstein's famous formula E=mc^2. Stecker and Glashow have pointed out that evidence of the annihilation of the highest-energy gamma rays from Mkn 421 and Mkn 501, obtained from direct observations of these objects, demonstrates clearly that Lorentz invariance is alive and well and not being violated. If Lorentz invariance were violated, the gamma rays would pass right through the extragalactic infrared fog without being annihilated.

This is because annihilation requires a certain amount of energy in order to create the electrons and positrons. This energy budget is satisfied for the highest-energy gamma rays from Mkn 501 and Mkn 421 in interacting with infrared photons if both are moving at the well-known speed of light according to the special theory of relativity. However, if the gamma rays in particular were moving at a slower velocity because of Lorentz invariance violation, the total energy available would be inadequate and the annihilation reaction would be a 'no go.'

'The implications of these results,' Stecker said 'is that if Lorentz invariance is violated, it is at such a small level -- less than one part in a thousand trillion -- that it is beyond the ability of our present technology to find. These results may also be telling us that the correct form of string theory or quantum gravity must obey the principle of Lorentz invariance.'