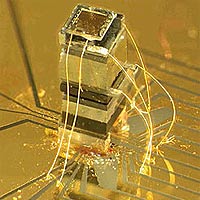 Photo of the NIST chip-scale magnetometer. The sensor is about as tall as a grain of rice. The widest block near the top of the device is an enclosed, transparent cell that holds a vapor of rubidium atoms.

A low-power, magnetic sensor about the size of a grain of rice that can detect magnetic field changes as small as 50 picoteslas—a million times weaker than the Earth's magnetic field—has been demonstrated by researchers at the National Institute of Standards and Technology (NIST). Described in the Dec. 27 issue of Applied Physics Letters,* the device can be powered with batteries and is about 100 times smaller than current atom-based sensors with similar sensitivities, which typically weigh several kilograms (about 6 pounds).

The new magnetic sensor is based on the principles of a NIST chip-scale atomic clock, announced in August 2004. Expected applications for a commercialized version of the new sensor could include hand-held devices for sensing unexploded ordnance, precision navigation, geophysical mapping to locate minerals or oil, and medical instruments.

Like the NIST chip-scale clock, the new magnetic sensor can be fabricated and assembled on semiconductor wafers using existing techniques for making microelectronics and microelectromechanical systems (MEMS). This offers the potential for low-cost mass production of sensors about the size of a computer chip. When packaged with associated electronics, the researchers believe the mini magnetometer will measure about 1 cubic centimeter or about the size of a sugar cube.

Magnetic fields are produced by the motion of electrons either in the form of an electrical current or in certain metals such as iron, cobalt and nickel. The NIST miniature magnetometer is sensitive enough to detect a concealed rifle about 12 meters (40 feet) away or a six-inch-diameter steel pipeline up to 35 meters (120 feet) underground.

The sensor works by detecting minute changes in the energy levels of electrons in the presence of a magnetic field. A tiny sample of the element rubidium is heated within a sealed, transparent cell to form a rubidium vapor. Light from a semiconductor laser is transmitted through the atomic vapor. In the presence of a magnetic field, the amount of laser light that is absorbed by the atoms changes and this is detected by a photocell. Larger magnetic fields produce proportionally bigger changes in the atomic energy levels and change the absorption by the atom.

The key advantages of the new sensor, says Peter Schwindt, one of the NIST developers, are its accuracy and sensitivity given its small size. So called “fluxgate” magnetometers achieve equivalent or better sensitivity but are much less accurate and much larger. They also detect only the portion of a magnetic field pointing along the sensor, while the atomic magnetometers detect the total field strength, a desirable capability for many magnetic imaging and search applications. Superconducting quantum interference devices (SQUIDs) are more sensitive, but must be cryogenically cooled, making them substantially larger, power hungry and more expensive. 'Magnetoresistive' devices like those used in heads that read computer hard drives are small and cheap, but are typically less sensitive and less accurate. A separate NIST research group has developed a new magnetoresistive magnetic sensor.

The research was funded by the U.S. Defense Advanced Research Projects Agency (DARPA-MTO).