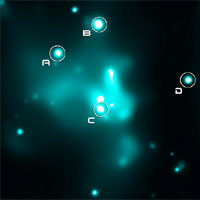 A swarm of 10,000 or more black holes may be orbiting the Milky Way's supermassive black hole, according to new results from NASA's Chandra X-ray Observatory. This would represent the highest concentration of black holes anywhere in the Galaxy.

These relatively small, stellar-mass black holes, along with neutron stars, appear to have migrated into the Galactic Center over the course of several billion years. Such a dense stellar graveyard has been predicted for years, and this represents the best evidence to date of its existence. The Chandra data may also help astronomers better understand how the supermassive black hole at the center of the Milky Way grows.

The discovery was made as part of Chandra's ongoing program of monitoring the region around Sagittarius A* (Sgr A*), the supermassive black hole at the center of the Milky Way. It was announced today by Michael Muno of the University of California, Los Angeles (UCLA) at a meeting of the American Astronomical Society in San Diego, CA.

Among the thousands of X-ray sources detected within 70 light years of Sgr A*, Muno and his colleagues searched for those most likely to be active black holes and neutron stars by selecting only the brightest sources that also exhibited large variations in their X-ray output. These characteristics identify black holes and neutron stars that are in binary star systems and are pulling matter from nearby companion stars. Of the seven sources that met these criteria, four are within three light years of Sgr A*.

'Although the region around Sgr A* is crowded with stars, we expected that there was only a 20 percent chance that we would find even one X-ray binary within a three-light-year radius,' said Muno. 'The observed high concentration of these sources implies that a huge number of black holes and neutron stars have gathered in the center of the Galaxy.'

The net effect is that black holes spiral inward, and the low-mass stars move out. From the estimated number of stars and black holes in the Galactic Center region, dynamical friction is expected to produce a dense swarm of 20,000 black holes within three light years of Sgr A*. A similar effect is at work for neutron stars, but to a lesser extent because they have a lower mass.

Once black holes are concentrated near Sgr A*, they will have numerous close encounters with normal stars there, some of which are in binary star systems. The intense gravity of a black hole can induce an ordinary star to 'change partners' and pair up with the black hole while ejecting its companion. This process and a similar one for neutron stars are expected to produce several hundreds of black hole and neutron star binary systems.

'If only one percent of these binary systems are X-ray active each year, they can account for the sources we see,' said Eric Pfahl of the University of Virginia in Charlottesville and a coauthor of a paper describing these results that has been submitted to the Astrophysical Journal Letters. 'Although the evidence is mostly circumstantial, it makes a strong case for the existence of a large population of neutron stars and stellar-mass black holes within three light-years of the center of our Galaxy.'

The region analyzed in this research near Sgr A* has been observed 16 times between 1999 and 2004 using Chandra's Advanced CCD Imaging Spectrometer (ACIS) instrument. Other members of the research team include Frederick K. Baganoff (Massachusetts Institute of Technology), Niel Brandt (Penn State), Andrea Ghez and Jessica Lu (UCLA).

News Story Origin and Copyright: Chandra
Click here for the original news release.
'The mathematician's patterns, like the painter's or the poets, must be beautiful; the ideas, like the colours or the words, must fit together in a harmonious way. Beauty is the first test: there is no permanent place in the world for ugly mathematics.'