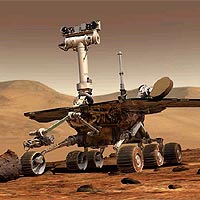 Flight-team engineers for NASA's Mars Exploration Rover Mission were encouraged this morning when Spirit sent a simple radio signal acknowledging that the rover had received a transmission from Earth.

However, the team is still trying to diagnose the cause of earlier communications difficulties that have prevented any data being returned from Spirit since early Wednesday.

"We have a very serious situation," said Pete Theisinger of NASA's Jet Propulsion Laboratory, project manager for Spirit and its twin, Opportunity.

Spirit did send a radio signal via NASA's Mars Global Surveyor orbiter Wednesday evening, but the transmission did not carry any data. Spirit did not make radio contact with NASA's Mars Odyssey during a scheduled session two hours later or during another one Thursday morning. It also did not respond to the first two attempts Thursday to elicit an acknowledgment signal with direct communications between Earth and the rover, and it did not send a signal at a time pre-set for doing so when its computer recognizes certain communication problems. The successful attempt to get a response signal came shortly before 9 a.m. Pacific Standard Time.

No single explanation considered so far fits all of the events observed, Theisinger said. When the team tried to replicate the situation in its testing facility at JPL, the testbed rover did not have any trouble communicating. Two of the possibilities under consideration are a corruption of flight software or corruption of computer memory, either of which could leave Spirit's power supply healthy and allow adequate time for recovering control of the rover.

Engineers will continue efforts to understand the situation in preparation for scheduled communication relay sessions using Mars Global Surveyor at 7:10 p.m. PST and Mars Odyssey at 10:35 PST. Efforts to resume direct communications between Spirit and antennas of NASA's Deep Space Network will resume after the rover's expected wake-up at about 3 a.m. PST Friday.

Meanwhile, mission leaders decided to skip an optional trajectory correction maneuver today for Opportunity, the other Mars Exploration Rover. Opportunity is on course to land halfway around Mars from Spirit, in a region called Meridiani Planum, on Jan. 25 (Universal Time and EST; Jan. 24 at 9:05 p.m. PST).