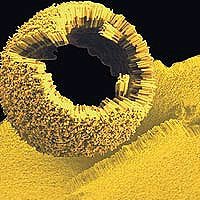 Self-assembly of gold-polymer nanorods results in a curved structure.

The natural world is full of curves and three dimensions, but the ability to deliberately and rationally construct such complex structures using nanoscale building blocks has eluded nanotechnologists who are eager to add curved structures to their toolbox.

Now a team of Northwestern University chemists report they have discovered ways to construct nanoscale building blocks that assemble into flat or curved structures with a high level of predictability, depending on the architecture and composition of the building blocks. The results are published in the Jan. 16 issue of the journal Science.

Using hybrid nanorods consisting of segments of gold and conducting polymers as their building blocks, the researchers created a number of unusual structures, including bundles, sheets and tubes of varying diameters. The extraordinary control that they were able to demonstrate over the process holds promise for building new and powerful drug delivery systems, electronic circuits, catalysts and light-harvesting materials.

"We are trying to mimic life itself," said Chad A. Mirkin, director of Northwestern’s Institute for Nanotechnology, who led the research team. "Much like proteins which must fold into complex structures in order to function properly, we have designed new materials that also form complex structures through the process of self-assembly."

Mirkin and his team made the different structures by varying the diameter of the gold-polymer rods or adjusting the ratio of polymer segment to gold segment in the rods. Both methods should enable researchers to design structures with interesting electronic and optical properties.

"We also discovered that the alumina template we used to build the rods initially is essential in guiding the assembly process," said Mirkin, also George B. Rathmann Professor of Chemistry. "Without the orientation the template provides, the rods do not form bundles, sheets or tubes."

The nanorods were made by the sequential deposition of gold and conducting polymer into the pores of an aluminum template. After the gold-polymer rods were synthesized, the template was dissolved, leaving the rods parallel to one another, gold end to gold end and polymer end to polymer end. The strong interactions between the polymer ends built stress, causing curves to form.

In a subsequent experiment, the researchers observed that self-assembly did not take place when the rods were randomly dispersed in solution.

"The research clearly shows that some unnatural building blocks, such as the gold-polymer rods, need assistance in order to form higher-ordered structures," said Mirkin. "This means that when we work with building blocks that are larger than molecules but smaller than macroscopic objects, we should consider building materials in a completely new way -- by using templates to help guide the assembly process and reduce the large number of assembly pathways potentially available to the building blocks."

In addition to Mirkin, other authors on the Science paper are Sungho Park (lead author), Jung-Hyurk Lim and Sung-Wook Chung, all from Northwestern University. The research was supported by the National Science Foundation and the U.S. Air Force Office of Scientific Research.