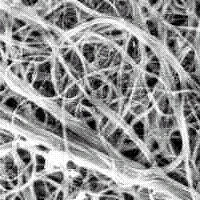 Carbon nanotubes (top) are applied to a NIST-developed pyroelectric detector that may improve thermal conductivity and resistance to laser damage.

Carbon nanotubes—a hot nanotechnology with many potential uses—may find one of its quickest applications in the next generation of standards for optical power measurements, which are essential for laser systems used in manufacturing, medicine, communications, lithography, space-based sensors and other technologies.

As described in a forthcoming paper in Applied Optics,* scientists at the National Institute of Standards and Technology (NIST) and the National Renewable Energy Laboratory have made prototype pyroelectric detectors coated with carbon nanotubes. Pyroelectric detectors and other thermal detectors are the basis for all primary standards used to ensure that laser power and energy measurements are traceable to fundamental units. The coating absorbs laser light and converts it to heat, which is conducted to a detector underneath made of pyroelectric material. The detector's rise in temperature generates a current, which is measured to determine the power of the laser.

Carbon nanotubes—tiny cylinders made of carbon atoms—conduct heat hundreds of times better than today's detector coating materials. Nanotubes are also resistant to laser damage and, because of their texture and crystal properties, absorb light efficiently. Scientists hope that the nanotubes' resistance to aging and hardening will allow them to extend the range of NIST laser power standards to ultraviolet wavelengths, which would support the development and calibration of sensors for detecting chemical and biological weapons. The research also may contribute to the use of carbon nanotubes in fuel cells.

As described in the paper, the NIST-led research team was first to demonstrate the use of an airbrush technique to apply carbon nanotubes to a thermal detector. The team also will report, at a workshop on carbon nanotubes at NIST Jan. 26-28, growing multiwalled nanotubes directly on detectors with a chemical vapor deposition process. The team is now measuring the optical and thermal properties of various tube compositions and topologies, using an unusual approach that is much faster than conventional methods.