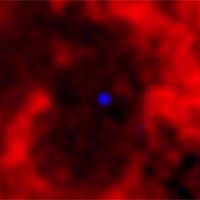 A 110-by-75 light-year-wide hole in the neutral hydrogen gas surrounding a magnetar shows that a massive star gave birth to this powerful magnetic object. Magnetars are the rare 'white tigers' of stellar astrophysics, comprising only 1% of known pulsars. In this image, red shows the neutral hydrogen gas mapped with CSIRO's Australia Telescope Compact Array and Parkes radio telescope, while blue represents Chandra X-ray Observatory data showing the magnetar. The bubble in the hydrogen was cleared out by a superstrong wind from the magnetar's progenitor star.

Astronomy is a science of extremes--the biggest, the hottest, and the most massive. Today, astrophysicist Bryan Gaensler (Harvard-Smithsonian Center for Astrophysics) and colleagues announced that they have linked two of astronomy's extremes, showing that some of the biggest stars in the cosmos become the strongest magnets when they die.

'The source of these very powerful magnetic objects has been a mystery since the first one was discovered in 1998. Now, we think we have solved that mystery,' says Gaensler.

The astronomers base their conclusions on data taken with CSIRO's Australia Telescope Compact Array and Parkes radio telescope in eastern Australia.

A magnetar is an exotic kind of neutron star--a city-sized ball of neutrons created when a massive star's core collapses at the end of its lifetime. A magnetar typically possesses a magnetic field more than one quadrillion times (one followed by 15 zeroes) stronger than the earth's magnetic field. If a magnetar were located halfway to the moon, it could wipe the data from every credit card on earth.

Magnetars spit out bursts of high-energy X-rays or gamma rays. Normal pulsars emit beams of low-energy radio waves. Only about 10 magnetars are known, while astronomers have found more than 1500 pulsars.

'Both radio pulsars and magnetars tend to be found in the same regions of the Milky Way, in areas where stars have recently exploded as supernovae,' explains Gaensler. 'The question has been: if they are located in similar places and are born in similar ways, then why are they so different?'

Previous research has hinted that the mass of the original, progenitor star might be the key. Recent papers by Eikenberry et al (2004) and Figer et al (2005) have suggested this connection, based on finding magnetars in clusters of massive stars.

'Astronomers used to think that really massive stars formed black holes when they died,' says Dr Simon Johnston (CSIRO Australia Telescope National Facility). 'But in the past few years we've realized that some of these stars could form pulsars, because they go on a rapid weight-loss program before they explode as supernovae.'

These stars lose a lot of mass by blowing it off in winds that are like the sun's solar wind, but much stronger. This loss would allow a very massive star to form a pulsar when it died.

To test this idea, Gaensler and his team investigated a magnetar called 1E 1048.1-5937, located approximately 9,000 light-years away in the constellation Carina. For clues about the original star, they studied the hydrogen gas lying around the magnetar, using data gathered by CSIRO's Australia Telescope Compact Array radio telescope and its 64-m Parkes radio telescope.

By analyzing a map of neutral hydrogen gas, the team located a striking hole surrounding the magnetar. 'The evidence points to this hole being a bubble carved out by the wind that flowed from the original star,' says Naomi McClure-Griffiths (CSIRO Australia Telescope National Facility), one of the researchers who made the map. The characteristics of the hole indicate that the progenitor star must have been about 30 to 40 times the mass of the sun.

'A magnetar goes through a cosmic extreme makeover and ends up very different from its less exotic radio pulsar cousins,' he says.

If magnetars are indeed born from massive stars, then one can predict what their birth rate should be, compared to that of radio pulsars.

'Magnetars are the rare `white tigers' of stellar astrophysics,' says Gaensler. 'We estimate that the magnetar birth rate will be only about a tenth that of normal pulsars. Since magnetars are also short-lived, the ten we have already discovered may be almost all that are out there to be found.'

The team's result will be published in an upcoming issue of The Astrophysical Journal Letters.