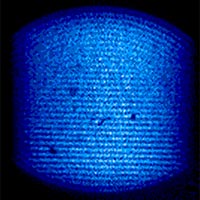 This false color image shows an ultracold plasma of 26,000 beryllium ions fluorescing when hit by a laser pulse.

A key process that enhances the production of nuclear energy in the interior of dense stars has been re-created in the laboratory for the first time by physicists at the National Institute of Standards and Technology (NIST). The work may help scientists study topics such as nuclear fusion as a possible energy source and demonstrates a new method for studying and modeling dense stellar objects such as white dwarfs.

The NIST experiments, described in the Jan. 18 issue of Physical Review Letters,* involve temperature measurements of ultracold crystals as they melt. First, a 'plasma' of tens of thousands of singly charged beryllium atoms is trapped using electric and magnetic fields and then cooled to almost absolute zero using lasers. When the lasers are turned off, the plasma begins to heat up. At 10 milliKelvin—just 0.01 degree above absolute zero—the temperature suddenly rises more than 10 billion times faster than predicted by theory. This burst of energy in a very cold system of highly interactive particles is believed to mimic events occurring inside the hot, dense interiors of stars, where plasmas of highly charged atoms undergo accelerated nuclear reactions.

Beryllium ions are frequently used in NIST research on topics such as development of future atomic clocks and quantum computing studies. Such rapid heating was first noticed in experiments attempting to prepare special states of beryllium ions that can improve the precision of an atomic clock.

Scientists have suspected for decades that the fusion of atoms that powers stars is enhanced when the plasmas at their cores somehow reduce the natural repulsion between charged ions, increasing the chances that pairs of ions will collide and produce nuclear reactions. NIST researchers found that, at a certain temperature, their trapped beryllium ions also collided more frequently and that the plasma temperature suddenly shot up. In this case, the collisions resulted in a transfer of energy between two types of motions made by the ions.

The research was supported in part by the Office of Naval Research and National Science Foundation.