Even in heaven, stars can only get so big 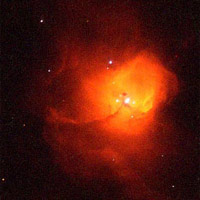 New research from the University of Michigan shows that there may be an upper limit to the mass of a star, somewhere around 120 to 200 times bigger than our sun.

The sun is the closest star to Earth and therefore looks very big to us, but compared to other stars in the Milky Way, it’s considered a low-mass star. Knowing that there may be a limit to a star’s mass answers a fundamental question, but raises a raft of other issues about what limits their mass, said Sally Oey, assistant professor of astronomy.

The study is the first to determine the stellar upper mass limit by examining a wide range of star clusters, said Oey (rhymes with chewy). In the paper, “Statistical Confirmation of a Stellar Upper Mass Limit,” Oey and colleague C.J. Clarke, from the Institute of Astronomy at Cambridge, England, compared historical data on 12 OB associations, large aggregates of hundreds to several thousands of young stars.

The paper will appear in the Feb. 10 edition of the Astrophysical Journal Letters.

Other studies have suggested an upper mass limit of about the same size, but had looked at only one cluster. “Ours has more statistical significance because we were able to use many clusters,” Oey said.

Oey and Clarke looked at star clusters in the Milky Way, our galaxy, and in the Magellanic Clouds, the brightest satellite galaxies, because they are close enough to enable seeing individual stars and making measurements, Oey said.

“If you looked at any of the clusters, you’ll see roughly the same ratio of big to little stars,” Oey said. Based on the size and number of stars, the probability of finding stars above a certain mass dropped significantly at 120-200 solar masses, Oey said.

The question of mass is an important one because it relates to basic star formation, Oey said. “My African violets won’t grow any bigger now because their roots are totally taking up the maximum room in the pot,” she said. “If I repotted them they would grow larger. Are the stars maxed out because the parent clouds are limiting them, or because, like a whale in the sea, there’s something else physical about stars themselves that limits the size?

“The question about why stars have the masses that they do is fundamental, and our lack of understanding shows that we really don’t know some basics of how stars form.”

The biggest stars put out huge amounts of energy by exploding when they die or by releasing ultraviolet radiation during the star’s normal life. That puts tremendous energy into the interstellar medium, which in turn leads to evolutionary activity like renewed star formation and the conversion of gas into stars.

“If you have more stars and energy in the interstellar medium it means more evolutionary activity,” Oey said. “It stirs things up.”