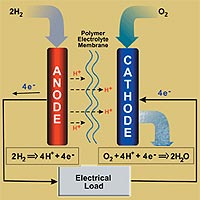 All fuel cells contain two electrodes - one positively and one negatively charged - with a substance that conducts electricity (electrolyte) sandwiched between them.

With the U.S. Department of Energy’s announcement today of yet another advance in the development of fuel cell technology, the nation moves one step closer to the time when all barriers—including cost, size, and efficiency—are overcome to make fuel cells commonplace in our homes and businesses.

Researchers at Virginia Polytechnic Institute and State University, working under a research grant managed by the National Energy Technology Laboratory, developed a highly efficient converter that can boost low DC (direct current) voltage produced by solid oxide fuel cell stacks to the higher voltage required for conversion to AC (alternating current) for household and commercial applications. The boost is significant because it provides another technological step in increasing the efficiency, and reducing the size and cost of fuel cells.

Virginia Tech, which is applying for a patent on the technology, developed its converter in the Department of Energy’s Solid State Energy Conversion Alliance (SECA) Program, created to hasten the development of solid oxide fuel cells so they could be affordably marketed for power generation.

Under terms of the SECA partnership, Virginia Tech will offer each of the SECA industrial teams the first option to enter into an agreement—legally called a non-exclusive license—to apply the converter technology to their solid oxide fuel cell development projects. In a related matter, a private company has expressed an interest in Virginia Tech’s converter and is negotiating to apply it to solar, wind, and other renewable power technologies.

'The significance of Virginia Tech’s work is that it facilitates the downsizing of the fuel cell stack and boosts net power output, while at the same time reducing the size and cost of the electronic systems behind it—key technical objectives for maturing solid oxide fuel cell technology to commercial-market self-sustainable status,' according to NETL Project Manager Don Collins.

Virginia Tech’s device, when combined with highly efficient switching and digital control techniques, converts 22 volts to 400 volts at 97 percent energy efficiency. The device is able to boost voltage and reduce 120-hertz ripple current to 2 percent without the costly, bulky capacitors or additional converters that are customarily used. The net effect is that fuel consumption, the size of fuel cell systems, and costs are reduced, thereby taking a significant step toward SECA’s goal of 40–60 percent overall fuel cell efficiency at a cost of $400 per kilowatt by 2010. SECA studies indicate that each 1 percent improvement in inverter efficiency can reduce fuel cell stack costs by $5–$10 per kilowatt.

As the nation anticipates unbridled growth in the demand for electricity in the near future, fuel cells are viewed as an attractive source of energy because they provide significant environmental, energy, and economic benefits. By producing electricity through chemical reactions, fuel cells don’t require combustion processes or the equipment of traditional power generation. Fuel cells emit very low levels of pollutants when powered by fossil fuels, such as natural gas, and virtually no pollutants when powered by hydrogen. SECA fuel cells will also permit flexible operation on a variety of fuels and will provide both distributed and central generation options that will greatly enhance U.S. energy security.

Once their costs are reduced to the $400 per kilowatt level and efficiency goals are attained, fuel cells can be used as power generation resources in a variety of ways, such as onsite power for houses and commercial properties, transportation, and modular application by utilities. In addition, the flexibility of solid oxide fuel cells to be combined with turbines as ultrahigh efficiency hybrids contributes significantly to the Administration’s FutureGen concept, a plan for the zero-emission, high-efficiency power plant of the future.

As a key component of FutureGen, fuel cells serve as a foundation for the Administration’s Clean Coal Power Initiative, a cost-shared partnership between government and industry to demonstrate coal-based, advanced power-generation technologies.

News Story Origin and Copyright: DOE
Click here for the original news release.
'The mathematician's patterns, like the painter's or the poets, must be beautiful; the ideas, like the colours or the words, must fit together in a harmonious way. Beauty is the first test: there is no permanent place in the world for ugly mathematics.'