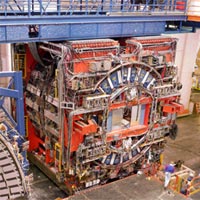 The CDF detector rolling out of the collision hall after discovering the Top Quark.

A new measurement by a student and professor at the University of Rochester has shed new light on the limits of scientists’ standard model of physics. Doctoral student Ben Kilminster and Kevin McFarland, professor of physics, used the particle accelerator at Fermilab to conduct the first measurement ever done with enough precision to discern certain characteristics of how the top quark, the heaviest particle in known physics, decays. The work is reported in today’s issue of Physical Review D.

“No one has made this kind of measurement as precisely, and the findings are laying another brick in our knowledge of how the universe works,” says McFarland. “People are trying desperately to understand why the weak force is weak. At the beginning of the universe, it and the force that is responsible for light, among other things, were essentially one and the same; but now, light can cross the cosmos, but the weak force can’t even cross an atom. We’ve come up with a lot of theories as to why this is, but these new findings mean that a lot of those theories are going to have to be crossed off.”

To understand the critical connection between the top quark and the weak force’s W-boson, McFarland and Kilminster designed a test to measure the top quark’s parity. Parity is a property of quantum particles that describes how they act if their directions in space are reversed, as though they were being viewed in a mirror. Imagine lobbing a tennis ball over the net to your opponent. You would expect that when your opponent hits the ball back, reversing its direction, that the ball will behave identically—falling to the court, bouncing off your racket, etc. Some particles, however, change their properties when “mirrored.” It would be as if returning tennis balls ignore gravity and pass right through your racket. Physicists discovered, to their amazement, that the reason for this lack of parity is that the weak force only seems to act on particles that have a certain kind of characteristic, called “left-handed spin.”

Imagine the tennis ball again, flying over the net, spinning on an axis that’s pointed at your opponent, so it appears to be spinning clockwise from your position behind it. If your opponent returns the ball perfectly—reflecting it as if in a mirror—the direction of the ball has reversed, but its spin will still appear to be moving clockwise as it flies toward you. If you were to point your right thumb in the direction the ball was flying as you smacked it over the net, your fingers would naturally curl in a clockwise direction. When it returned to you, and you aimed your left thumb in its direction of travel, your fingers would curl in that same clockwise direction, but with your thumb pointing toward you. Scientists use this as a quickie method to label the spin of particles as “left-“ and “right-handed.” For some reason, which physicists are still puzzling over, the weak force only ever affects left-handed particles.

McFarland and Kilminster knew that if they could show that the tremendously heavy top quark was left-handed, then the weak force would likely act on it the same way it did to all the other known quarks.

“In our quest to understand the nature of the weak force, physicists have come up with some theories that link the weak force’s extremely heavy W-boson with the extremely heavy top quark,” says McFarland. “In those theories, the top quark holds a special place in the universe, including the possibility of the universe being filled with top-quark pairs that create a drag on other particles, and hence give them mass. If the W-boson and top quark were intimately linked, it would have ramifications for all of physics.”

Measuring the handedness of the top quark with precision had never been accomplished before. Since there is no known way to make the measurement of the top quark directly, the Rochester team decided to look at the particles the top quark decays into. One of the principal functions of the weak force is to “break down” heavier particles, like the top quark, into lighter quarks from which nearly everything in the universe is constructed. In the Fermilab accelerator, the team let a soup of top quarks decay into their constituent, lighter particles. Those particles would shoot out in certain directions, based on their spin. Connecting which particles came from which top quarks in the ensuing collision had always been the stumbling block for physicists, but Kilminster developed a program that essentially picked out all the particles that might have been produced by a top quark decay, and statistically figured out which top quark they came from.

The results showed that for the majority of the time, the top quark’s decay spattered its resulting particles in a pattern that strongly suggested the top quark decay is not symmetric, and thus that the weak force likely interacts with it in the same basic manner that it interacts with all particles. The theories that were based on the idea that the top quark and the weak force were linked to each other in a unique fashion were shown to be highly unlikely.

“As it happens, it seems the fact that the top quark and the W-boson have around the same mass may just be a coincidence,” says McFarland. “Models that rely on a link between the two are becoming more and more implausible. The theories are really a last ditch effort to make do with the fundamentally flawed Standard Model of physics. If these theories keep getting disproved, we’re going to have to go on to an entirely new model of the universe’s workings.”

This research was funded by the National Science Foundation and the U. S. Department of Energy.