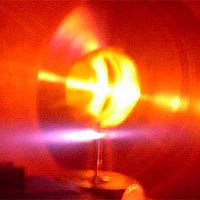 The purple light originates from helium atoms excited by intense laser light. The laser pulses propagate along the axis of the purple lobes (horizontally) through the helium gas, and the X-ray beam (not visible) is radiated in a beam several hundred micrometers in diameter in the same direction.

Radiologists and biologists have been dreaming - ever since the discovery of lasers - of a compact laboratory source emitting X-rays in one direction in a laser-like beam. Such a source would permit X-ray images to be recorded with far higher resolution at vastly reduced dose levels, allowing early-stage cancer diagnosis at dramatically reduced risk. Microscopes furnished with this source would make nanometer-sized biomolecules perceivable in their natural surrounding (in vivo). It may take many years before this dream comes true, but the experiment reported by an Austrian-German collaboration led by Ferenc Krausz indicates a promising way of realizing the dream some day. Researchers at Vienna University of Technology, the University of Würzburg, the University of Munich and Max Planck Institute of Quantum Optics demonstrated the first source of laser-like X-rays at a wavelength of 1 nanometer with a compact laboratory apparatus [Nature 433, 596 (2005)] in an experiment in Vienna, funded by the Austrian Science Fund.

The colour of light is determined by the length of one cycle of the electromagnetic wave (referred to by physicists as the wavelength) that makes up light. Red light has a wavelength of around 700 nanometers, whereas our eye perceives radiation as violet light if its wavelength is only 400 nanometers. Light of even shorter wavelength is invisible (ultraviolet light), and with the wave cycle shortened to less than 1 nanometer, the X-ray regime is entered.

The Austrian-German team focused a sequence of intense ultrashort flashes of red light at a gas of helium atoms to convert 700-nm laser light into a 1-nm wave of X-ray light emitted by the excited atoms (Figure). The intense laser field makes the negatively charged electron cloud perform giant oscillations around the positively charged atomic core, thereby turning the atoms into antennas. Because of the giant amplitude of their oscillations, these radiate waves not only at the wavelength of the driving laser (700-nm) but also at shorter wavelengths. Since the antennas are in phase over in time, they also keep time when emitting their waves. Although these tiny 'atomic' waves are extraordinarily faint, because they all oscillate in time they add to build up an X-ray wave of significant intensity delivered in a highly-directed beam parallel to the incident laser.

The phenomenon described above is not new. It has become a standard technique for routinely producing laser-like extreme ultraviolet radiation at wavelengths down to the 10 nanometer regime. Pushing the frontier of this technology to ever shorter wavelengths has proven ever more difficult because it requires atoms to be exposed to laser light of ever greater intensity, which tends to disintegrate the atoms. What makes the situation even worse, the free electrons ripped off the atoms by the strong laser field impede the buildup of an intense wave from the faint 'atomic' waves.

The Vienna-Würzburg-Munich team have overcome these problems by irradiating the atoms with the world’s shortest high-intensity laser pulses, lasting merely 5 millionths of a billionth of a second (= 5 femtoseconds). These pulses hit the atoms so abruptly that they have no time to disintegrate before emitting the X-ray burst. Thanks to this extremely short interaction time, the researchers have not only managed to break the nanometer barrier but also created a source of X-ray bursts that may, for the first time, be briefer than 0.1 femtosecond (= 100 attoseconds). The X-ray beam delivered by the new source is - at present - too weak for any practical applications, but the research team are confident that technical improvements will boost the X-ray power by several orders of magnitude. Once this feat is achieved, this novel research tool will open up new prospects in several areas of physics, biology and materials science.