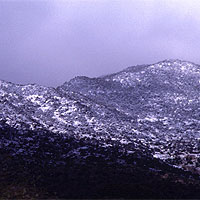 Why has the Arctic warmed so dramatically in recent years? How does the Arctic's circulation keep frigid air over the poles and sometimes allow it to spill across the United States? And how might global change affect the behavior of this circulation?

NCAR scientist Clara Deser addressed these and other questions in a presentation in Denver on February 17 at the annual meeting of the American Association for the Advancement of Science.

Although the AO has been recognized by various names for many years, it has become a topic of keen research interest only in the last decade. The AO index describes the relative intensity of a semipermanent low-pressure center over the North Pole. A band of upper-level winds circulates around this center, forming a vortex. When the AO index is positive and the vortex intense, the winds tighten like a noose around the North Pole, locking cold air in place. A negative AO and weak vortex (as has been the case most of this winter) allow intrusions of cold air to plunge southward into North America, Europe, and Asia. Apart from variations like this winter's, the index has been mostly positive in wintertime since the late 1980s.

'The Arctic Oscillation has strengthened in recent decades, contributing to the unusual warmth over the Northern Hemisphere land masses,' says Deser. 'This has led to the speculation that the AO may be affected by increasing greenhouse gas concentrations and that it may, in turn, enhance global warming.' Recent computer-model simulations support this view. Deser is also examining the relationship between the AO and ozone, which has been measurably depleted across the region in recent years.

Clara Deser has been a scientist in the NCAR Climate and Global Dynamics Division since 1997. Her research focuses on analyzing climate variability, including the interplay among the atmosphere, oceans, and ice. She has also studied upper-ocean dynamics and the El Niño/Southern Oscillation. The author or coauthor of more than 30 scientific papers, Deser received the Meisinger Award from the American Meteorological Society in 1998. She holds a Ph.D. in atmospheric science from the University of Washington.