Ion Engine to Open Up the Solar System 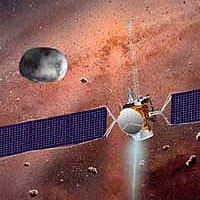 To most vehicle owners, the value of their vehicle decreases while the mileage on the engine increases. That wisdom does not hold true for NASA's ion engine, whose odometer continues to spin, to the delight of its owners.

This little engine that could has more than made up for its diminutive size, proving that sometimes less is more -- particularly in space. It was the first non-chemical propulsion system to be used as the primary means of propelling a NASA spacecraft.

Meanwhile, back on Earth, a spare of the Deep Space 1 ion engine has been running continuously since October 1998, setting ion engines on a course to become the preferred method of propulsion for future missions to explore our solar system.

Under the Hood
Unlike the fireworks of most chemical rocket engines that use solid or liquid fuels, the ion engine emits only a faint blue glow of electrically charged atoms of xenon. Xenon is the same gas found in photo flash tubes and in many lighthouse bulbs. The thrust from the engine is as gentle as the force exerted by a sheet of paper held in the palm of your hand. Over the long haul though, the engine can deliver 10 times as much thrust per kilogram of fuel than traditional rockets.

Key to the ion technology is its high exhaust velocity. The ion engine can run on a few hundred grams of propellant per day, making it lightweight. Less weight means less cost to launch, yet an ion-propelled spacecraft can go much faster and farther than any other spacecraft.

Visiting a Comet
NASA's Deep Space 1 mission validated 12 high-risk advanced technologies that had never flown before. Part of NASA's New Millennium Program, Deep Space 1 was launched in the fall of 1998 as an 11-month mission, but things went so well that it kept going for a few more years to continue testing its ion engine while doing a little science.

It successfully completed its primary mission to test these technologies, then exceeded expectations by cashing in on its frequent flyer miles and flying by comet Borrelly. It captured the best close-up pictures of a comet and returned the best science data from a comet ever. The spacecraft was retired in December 2001, but back home its spare engine kept on running.

Putting the Pedal to the Metal
A team led by Anita Sengupta, engineer and member of JPL's advanced propulsion technology group, has kept the Deep Space 1 flight spare ion engine running for 24,750 hours. If it had been an automobile engine instead of an ion engine, and it was driven for 24,750 hours at 80.5 kilometers per hour (50 mph), it would have traveled 1.93 million kilometers (1.2 million miles) without an oil change or tune up. The purpose of the test is to understand how an ion engine wears, and what phenomena contribute to its eventual end of life. With this information, NASA scientists can plan missions better and design improved ion engines.

On August 25, 2002, the ongoing life test of the spare ion thruster passed a major milestone by processing 200 kilograms (441 pounds) of xenon propellant. This amount of propellant, in addition to being a nice round number, is also the amount required for the ion propulsion system on the Dawn spacecraft, which will be the first science mission to use ion propulsion.

Dawn is a mission to explore the structure and composition of Ceres and Vesta, two large asteroids that have remained relatively unchanged since their formation at the dawn of our solar system. The mission is expected to launch in 2006.

'This remarkable achievement is a tribute to everyone on the team at JPL who has performed this enormously difficult test for the past four years,' said Sengupta. 'What we have learned and continue to learn from this test will significantly benefit near-term applications of ion propulsion, as well as enable the design of the next generation of ion engines for future NASA space missions.'

The test team expects the engine to reach its end-of-life at full power sometime in November of this year. At that point, the thruster will no longer be operational at full power, but will still work at the lower power end of the throttle range.

The ion engine's impressive track record may not only make it the propulsion system of choice for future missions, such as Dawn and those to return samples back from Mars, but also for many other potential solar electric propulsion missions. Those missions will benefit from the higher total impulse that this test and supporting analyses have made possible.