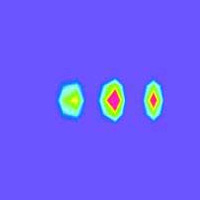 The image was taken with the energetic neutral atom imaging technique by the Magnetospheric Imaging Instrument on Cassini as the spacecraft flew past Jupiter in early 2001 at a distance of about 10 million kilometers (6 million miles). This technique provides information about a source by detecting neutral atoms emitted by the source, comparable to how a camera reveals information about an object by detecting photons coming from the object.

The central object in this image represents energetic neutral atom emissions from Jupiter itself. The outer two objects represent emissions from a donut-shaped cloud, or torus, that shares an orbit with Jupiter's moon Europa. The cloud's emissions appear dot-like because of the viewing angle. The torus is viewed edge-on, and the image is brightest at the line-of-sight angles that pass through the greatest volume of it.

Stretching millions of miles around Jupiter, the donut-shaped cloud, known as a 'torus,' is believed to result from the uncommonly severe bombardment of ion radiation the jovian giant sends toward Europa. That radiation damages Europa's surface, kicking up and pulling apart water-ice molecules and dispersing them along the moon's orbit into a neutral-gas torus with a mass of about 60,000 tons.

'Surprisingly, Europa's gas cloud compares to that generated by the volcanically active satellite Io,' Mauk said. 'But where Io's volcanoes are constantly spewing materials, mostly sulfur and oxygen, Europa is a comparatively quiet moon, and the water gas we see is a direct consequence of its icy surface being bombarded so intensely.' he said.

'By acting as both a source and a sink of charged radiation particles, the dense gas torus gives Europa much greater influence than was previously thought on the structure of, and energy flow within, Jupiter's huge space environment, its magnetosphere,' Mauk said.

The Applied Physics Laboratory team studied images of Jupiter taken in late 2000 and early 2001 with the laboratory's ion and neutral camera on NASA's Cassini spacecraft, now en route to Saturn. Mauk says this is the first substantial discovery made at an extraterrestrial planet using an innovative technique known as energetic neutral atom imaging.

'Planetary magnetospheres glow with energetic neutral atoms, much like a red-hot piece of iron glows with photons of light, and such neutral-atom glows can be remotely imaged,' Mauk said. 'To this point, no instrument has imaged that activity beyond Earth's magnetosphere. Energetic neutral atom imaging makes visible the three-dimensional structure of planetary space environments, which, until recently, were invisible to remote imaging techniques.'

Research team members at the Applied Physics Laboratory and co-authors on the Nature paper, 'Energetic Neutral Atoms from a Trans-Europa Gas Torus at Jupiter,' include Dr. Donald Mitchell, Dr. Stamatios Krimigis, Dr. Edmond Roelof and Dr. Christopher Paranicas. Krimigis, head of the space department at the laboratory, is principal investigator for Cassini's magnetospheric imaging instrument, which includes the ion and neutral camera.

The magnetospheric imaging instrument built by the Applied Physics Laboratory is one of 12 science instruments on the main spacecraft and one of six instruments designed to investigate the space environments around Saturn and its moons. Cassini will begin orbiting Saturn on July 1, 2004, and release its piggybacked Huygens probe about six months later for descent through the thick atmosphere of the moon Titan. Cassini-Huygens is a cooperative mission of NASA, the European Space Agency and the Italian Space Agency. NASA's Jet Propulsion Laboratory, Pasadena, Calif., manages the mission for NASA's Office of Space Science, Washington, D.C. JPL is a division of the California Institute of Technology in Pasadena.

An energetic neutral atom image showing the donut-shaped cloud around Jupiter is available at http://photojournal.jpl.nasa.gov/catalog/PIA04432 and at http://www.jhuapl.edu/newscenter/pressreleases/2003/030227.htm.

For more information on the magnetospheric imaging instrument and its science mission visit http://sd-www.jhuapl.edu/CASSINI.