A Cocoon Found Inside the Black Widow's Web 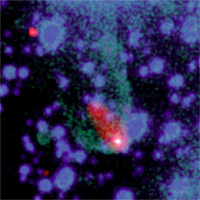 NASA's Chandra X-ray Observatory image of the mysterious "Black Widow" pulsar reveals the first direct evidence of an elongated cocoon of high-energy particles. (A pulsar is a rotating neutron star producing powerful beams of radiation that sweep like a searchlight.) This discovery shows this billion-year-old rejuvenated pulsar is an extremely efficient generator of a high-speed flow of matter and antimatter particles.

Known officially as pulsar B1957+20, the Black Widow received its nickname because it is emitting intense high- energy radiation that is destroying its companion through evaporation. B1957+20, which completes one rotation every 1.6-thousandths of a second, belongs to a class of extremely rapidly rotating neutron stars called millisecond pulsars.

The motion of B1957+20 through the galaxy, almost a million kilometers per hour, creates a bow shock wave visible to optical telescopes. The Chandra observation shows what cannot be seen in visible light: a second shock wave. This secondary shock wave is created from pressure that sweeps the wind back from the pulsar to form the cocoon of high- energy particles, visible for the first time in the Chandra data.

"This is the first detection of a double-shock structure around a pulsar," said Benjamin Stappers, of the Dutch Organization for Research in Astronomy (ASTRON), lead author on a paper describing the research that will appear in the Feb. 28, 2003, issue of Science magazine. "It should enable astronomers to test theories of the dynamics of pulsar winds and their interaction with their environment," he said.

Scientists believe millisecond pulsars are very old neutron stars that have been spun up by accumulating material from their companions. The steady push of the infalling matter spins it much the same way as pushing on a merry-go-round makes it rotate faster.

The result is an object about 1.5 times as massive as the Sun, 10 miles in diameter, rotating hundreds of times per second. The advanced age, very rapid rotation rate and relatively low magnetic field of millisecond pulsars put them in a totally separate class from young pulsars observed in the remnants of supernova explosions.

"This star has had an incredible journey. It was born in a supernova explosion as a young and energetic pulsar, but after a few million years grew old and slow and faded from view," said Bryan Gaensler of the Harvard-Smithsonian Center for Astrophysics in Cambridge, Mass., a coauthor of the paper. "Over the next few hundred million years, this dead pulsar had material dumped on it by its companion, and the pulsar's magnetic field has been dramatically reduced.

"This pulsar has been through hell, yet somehow it's still able to generate high-energy particles just like its younger brethren," continued Gaensler. The key is the rapid rotation of B1957+20. The Chandra result confirms the theory that even a relatively weakly magnetized neutron star can generate intense electromagnetic forces and accelerate particles to high energies to create a pulsar wind, if it is rotating rapidly enough.

Images and additional information about this result are available on the Internet at: