Saturn's A Ring has oxygen, but not life 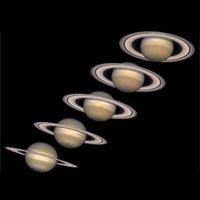 The Hubble Space Telescope captured these images of Saturn's seasons from a timespan of 1996 through 2000.

Data from the Cassini-Huygens satellite showing oxygen ions in the atmosphere around Saturn's rings suggests once again that molecular oxygen alone isn't a reliable indicator of whether a planet can support life.

That and other data are outlined in two papers in the Feb. 25 issue of the journal Science co-authored by University of Michigan engineering professors Tamas Gombosi, J. Hunter Waite and Kenneth Hansen; and T.E. Cravens from the University of Kansas. The papers belong to a series of publications on data collected by Cassini as it passed through the rings of Saturn on July 1.

Molecular oxygen forms when two oxygen atoms bond together and is known in chemical shorthand as O2. On Earth, it is a continual byproduct of plant respiration, and animals need this oxygen for life. But in Saturn's atmosphere, molecular oxygen was created without life present, through a chemical reaction with the sun's radiation and icy particles that comprise Saturn's rings.

'That means you don't need biology to produce an O2 atmosphere,' Waite said. 'If we want indicators to use in the search for life on other planets, we need to know what to look for. But oxygen alone isn't it.'

Because Saturn's rings are made of water ice, one would expect to find atoms derived from water, such as atomic oxygen (one atom) rather than O2, Waite said. However, the paper, called 'Oxygen Ions Observed Near Saturn's A Ring,' suggests the formation of molecular oxygen atmospheres happens more often in the outer solar system than expected. There is earlier evidence of molecular oxygen atmospheres elsewhere in the solar system—for instance above the icy Galilean moons of Jupiter—he said.

Four U-M College of Engineering faculty members are involved in the Cassini mission to explore Saturn's rings and some of its moons. Waite leads the team operating the ion and neutral mass spectrometer, the instrument that detected and measured the molecular oxygen ions. Other team members are J.G. Luhmann of the University of California, Berkeley; R.V. Yelle, of the University of Arizona, Tuscon; W.T. Kasprzak, of the Goddard Space Flight Center; R.L. McNutt of Johns Hopkins University; and W.H. Ip, of the National Central University, Taiwan.

A second, viewpoint paper called, 'Saturn's Variable Magnetosphere,' by Hansen and Gombosi, who is chair of the College of Engineering's department of Atmospheric, Oceanic and Space Sciences, reviews key findings from the other Cassini teams, including new information that contradicts data gathered 25 years ago, when the space craft Voyager passed by the planet.