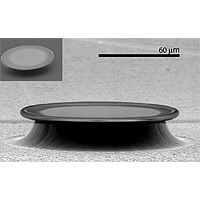 SEM micrograph of a toroid-shaped silica microcavity. The quality factor of this toroid was measured to be 1.00x108. Image courtesy: Prof. Vahala, Caltech.

In an advance that holds promise for integrating previously disparate functions on a chip, applied physicists at the California Institute of Technology have created a disk smaller than the diameter of a human hair that can store light energy at extremely high efficiency. The disk, called a "microtoroid" because of its doughnut shape, can be integrated into microchips for a number of potential applications.

Reporting in the February 27, 2003, issue of the journal Nature, the Caltech team describes the optical resonator, which has a "Q factor," or quality factor, more than 10,000 times better than any previous chip-based device of similar function. Q is a figure-of-merit used to characterize resonators, approximately the number of oscillations of light within the storage time of the device.

The devices store optical energy by resonant recirculation at the exterior boundary of the toroid and achieve Q factors in excess of 100 million. In general, resonators whether mechanical, electronic, or optical have many applications. TV tuners and quartz crystals in a wristwatch are examples of resonators at radio frequencies; at optical frequencies, resonators are used in filters, sensors, and quantum optics.

Attaining ultrahigh-Q and fabricating the resonators on a chip have so far been mutually exclusive. Only rather exotic structures, like droplets or microspheres, have exhibited the atomically smooth surfaces needed for ultrahigh-Q. Due to a novel fabrication step, it is now possible to achieve both high Q and atomically smooth surfaces at the same time and to bring two worlds together.

The fabrication procedure uses lithography and etching techniques on a silicon wafer in a manner similar to process steps used for making microprocessors and memories. Thus, the resonators can be integrated with the circuitry of a chip, with lab-on-a-chip functions, or even with other optical components. Wafer-scale processing methods also enable their production in large quantities, an important feature in many applications, like biosensing, where low-cost, field deployable sensors are envisioned.

The microtoroids were fabricated in the lab of Kerry Vahala, who is Jenkins Professor of Information Science and Technology and professor of applied physics at Caltech. Vahala is co-inventor of the device, along with his graduate students Deniz Armani, Tobias Kippenberg, and Sean Spillane.

"This is the first time an optically resonant device with an ultrahigh-Q has been fabricated on a chip," says Vahala.

Vahala says his group is exploring ways to further increase the Q value of these devices as well as to further reduce their size. He believes Q values in excess of 1 billion in even more compact toroids will soon be possible. Last year, in the February 7, 2002, issue of Nature, the Vahala group reported an efficient nonlinear wavelength source using ultrahigh-Q resonators. His group is now investigating microchip-toroid versions of these nonlinear sources that may one day be used in communications systems.

The work was supported by Caltech's Lee Center for Advanced Networking and DARPA.

Click here for more information on the Vahala group.