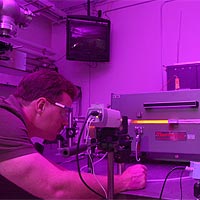 Laser weapons? This may not be as exotic as fans of Han Solo once thought, thanks to recent leaps forward in the development of a powerful free-electron laser, or FEL.

Free electron lasers have been shown to generate very large amounts of power, tunable from the microwave to the visible spectrum.

The Office of Naval Research is part of a team that is developing an electrically driven, tunable laser that could transmit infrared light for use in ship-defense systems.

The research is being performed at the Department of Energy's Thomas Jefferson National Accelerator Facility in Newport News, Virginia. Research paid off in mid-June when Jefferson scientists produced "first light" with a new 10-kilowatt FEL system.

ONR and the Jefferson team hope to use the FEL to generate 10 kW of infrared light and one kilowatt of ultraviolet light by late summer.

The mid-June success followed a demonstration in 1999 of a one-kilowatt FEL with the capacity to generate 2,100 watts of infrared light. During the two and one-half years that this laser operated, it broke all records for tunable high-average power lasers. The FEL has the capability of generating extremely short pulses, sub-picosecond pulses, (less than a billion billionth of a sec) in world record quantities. The pulses are short enough to interact with molecular bonds and result in exciting materials research and chemical synthesis.

These short pulses also give chemists the potential to dial in specific chemical reactions allowing for much more efficient (read cheaper) and less polluting synthesis of important chemicals. The device was used by more than 30 Navy, NASA, university and industry research groups for many applications, including investigation of new cost-effective methods for producing carbon nanotubes; understanding the dynamics of hydrogen defects in silicon; and investigating how proteins transport energy.

In the experiments, electrons were accelerated to higher energies in efficient, highly cost-effective accelerators in order to probe deep inside an atom's nucleus. The savings achieved by the Lab's superconducting electron-accelerating technology permit the FELs to remain on 100 percent of the time instead of only one or two percent. The FEL also can recycle more than 90 percent of the energy that is not converted to useful light in a single pass.

"The original one-kilowatt FEL exceeded the Navy's goals and expectations," says ONR project manager, Gil Graff. "No less is expected from the upgraded FEL. This is exciting."

ONR is teamed with the Air Force Research Lab and the Defense Department's Joint Technology Office to support the work of the Department of Energy's Thomas Jefferson National Accelerator Facility. The Jefferson Lab is managed for DoE by the Southeastern Universities Research Association, a consortium of universities in the Southeast.

The Navy's interest in this technology is the development and demonstration of an electrically driven tunable laser that can operate at infrared wavelengths (where light is most efficiently transmitted in the atmosphere) for potential applications in shipboard defense.

"What does that mean?" asks Graff. "Think USS Cole. Think what might have been done to prevent such an attack."