Longer-Lasting Lithium Batteries on the Horizon 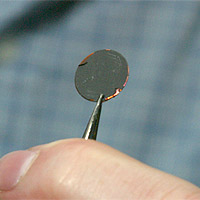 An electrode made by coating copper foil with the new silicon/graphite material, like the wafer-sized disc shown above, could serve as a more compact, longer lasting power source for rechargeable lithium-ion batteries. Photo courtesy Sandia National Laboratories.

Researchers at the Department of Energy’s Sandia National Laboratories in Livermore, Calif., have developed a new class of composite anode materials composed of silicon and graphite that may double the energy storage capacities currently possessed by graphite anodes, potentially leading to rechargeable lithium-ion batteries with more power, longer life, and smaller sizes.

The marriage of silicon and graphite may improve the specific capabilities of commercial graphite anode materials up to 400 percent, said Jim Wang, an Analytical Materials Science manager at Sandia.

"Currently, no device exists that is altogether small, robust, long lasting, and high-powered enough to meet the requirements of hybrid microsystems,” says Wang. "Electronics designers are forced to use low power-consumption components and designs that are limited in their longevity. Our newly discovered anode materials can improve the performance of microsystems by allowing for more powerful, sophisticated electronic components and by reducing the size and weight of the overall system."

Wang said researchers have, for years, been vexed by the capacity limits associated with traditional lithium battery anodes. Sandia turned to silicon, which offers more than 10 times the lithium capacity potential of graphite, but is hampered itself by a rapid capacity loss during the battery cycling phase. When small particles of silicon are combined within a graphite matrix, however, the large capacities are retained.

"The promising aspects of these materials are the large capacities, the capacity retention during cycling compared to other high-capacity materials, and the ability to control its performance by changing the composite composition and microstructure," Wang said.

Karl Gross, one of the principal investigators on the team, said the silicon/graphite composites could be produced via a simple milling process. The production technique is common within the battery industry, and the raw materials needed to produce the electrode material have proven to be inexpensive and abundant, Gross said.

The discovery could have wide-ranging impact on both consumer and national defense applications, said Ken Wilson, deputy director of Sandia’s Materials and Engineering Sciences Center. Sandia’s hybrid microsystems program, Wilson explained, focuses in part on wireless radiation detectors and other microsensor systems and devices used for homeland security applications, and is in constant need of enhanced sources of power and longevity.

In reaching its conclusions about the new material’s performance, Wang and other researchers at Sandia took a methodical approach that spanned three years. They first produced composite powders with varying silicon-to-carbon ratios and microstructures, then produced electrodes from those powders and evaluated their performance by electrochemical measurements. They then examined structural changes in the electrodes during cycling to understand the lithium transfer mechanism and materials phase changes to further improve the new material.

According to Greg Roberts, a Post Doctoral team member at Sandia, research and development focused on the replacement of graphite electrodes in rechargeable lithium batteries has taken many forms over the years. Possible replacement candidates, he explained, include non-graphitic carbons, intermetallics, oxides, nitrides, and composites. While each material has unique advantages and disadvantages that need to be considered when designing a battery for a specific application, Roberts said the silicon/graphite electrode materials are promising for applications that require high capacities delivered at low-to-moderate rates.

Sandia researchers acknowledge that some potential vulnerabilities exist with the new material. The complete elimination of fading of long-term cycling capacity in the silicon-based electrodes, Roberts said, may not be possible, though it can likely be minimized by the design of the carbon-silicon composite microstructure.