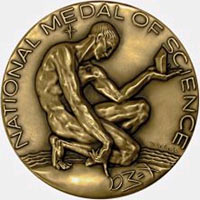 President Bush presented medals today to eight scientists and engineers, including two Nobel laureates, for their distinguished careers and lifelong and individual achievements.

The 2003 National Medal of Science, awarded to these ground-breaking scientists in a White House ceremony, is the nation’s highest honor for researchers whose impacts are prominent in fields of science and engineering as well as on their individual disciplines. The medals also recognize contributions to innovation, industry or education.

Receiving the 2003 National Medals of Science were:

R. Duncan Luce, the Distinguished Research Professor of Cognitive Science at the University of California, Irvine, awarded the medal in behavioral and social sciences, has been world-renowned as a theoretical mathematician of behavior of the past 50 years. His theory of choice helped launch the field of behavioral economics and gave scientists a powerful tool for understanding how animal and human learning occurs. He sparked the development of gaming theory, which is now applied to diverse systems including improving the accuracy of predictions of stock market fluctuation . His mathematical tools also developed the scientific study of judgment and decision making across disciplines.

Luce’s early work in demonstrating the laws governing behavior in humans and his development of measurement theory helped shape research in psychology, cognitive neuroscience, and sociology for more than three decades. It formed part of the theoretical base on which computer modeling of behavior was developed.

Three medals were bestowed on researchers in the biological sciences.

J. Michael Bishop, Chancellor and University Professor at the University of California, San Francisco, has been a leading contributor to cancer research for the past 30 years. He shared the Nobel Prize in 1989 with Harold E. Varmus for demonstrating that normal cells contain genes capable of becoming cancer-causing genes, a revolutionary finding that inaugurated a new era of research on the genetic origins of cancer. Bishop’s subsequent analysis of genetic changes in human cancers also influenced scientists worldwide.

Bishop made contributions to science policy in a variety of influential positions, including the President’s National Cancer Advisory Board. He co-chaired the Committee to Review the Intramural Program of the National Cancer Institute (1994), which led to important organizational reforms in the institute.

Also in the biological sciences, Solomon H. Snyder, the Distinguished Service Professor of Neuroscience, Pharmacology and Psychiatry at Johns Hopkins University School of Medicine, was acknowledged for discoveries that form the basis of most modern neurobiology. He transformed scientists’ understanding of neurotransmitters and their receptors in the nervous system. He pioneered the labeling of receptors and extended the technique by which numerous other neurotransmitter receptors in the brain are identified. His techniques became universally applied to the rational design of new drugs for psychiatric disorders and other conditions.

The Institute for Scientific Information cites Snyder as one of the 10 most-often cited biologists in the scientific literature. He authored or co-authored some 400 articles. And he influenced a large number of his former students toward careers and leadership positions in basic science, clinical research and the pharmaceutical industry.

Meanwhile, Charles Yanofsky, the Morris Herzstein Professor of Biology at Stanford University was honored for discovering an essential element in the genetic code – the linear relationship between the structures of genes and their protein products – the one gene-one protein relationship. This was an important foundation to his subsequent experiments on the regulation of gene expression. His work has revealed how controlled alterations in RNA structure allow RNA to serve as a regulatory molecule in both bacterial and animal cells.

Yanofsky's graduate students and postdoctoral fellows have become leaders among university faculties worldwide. Others now occupy prominent research positions in many of the leading biotechnology companies.

His cross-disciplinary work combined results from physics and chemistry with the new power of computers and led to drastic changes in chemical process design as well as the design and operation of efficient large-scale, separation equipment. Now standard in the chemical and related industries, these methods are estimated to have saved billions of dollars in energy, investment and operating costs.

Prausnitz co-authored with his students the first book on computer calculations of phase equilibrium – pre-dating by at least two decades the widespread use of automated, computer-based physical property prediction. He also authored three pioneering books used by chemical engineers around the world.

Carl R. de Boor, Professor Emeritus, University of Wisconsin, Madison, received the Medal of Science in mathematics. He is the world’s leading researcher in approximation theory, and its practical numerical implementation. A master of approximations by splines, an essential tool in computer-aided design and manufacture, computer graphics and image processing, de Boor was one of the pioneers in numerical computing, attacking the challenging problem of producing practical algorithms that can be applied to real software.

More than any other, De Boor is credited with the phenomenal success of spline functions – mathematical expressions that describe free-form curves and surfaces. De Boor was the first to understand their scientific potential, and put forward the novel theory that developed their important properties. Subsequently, he developed algorithms for the fast computation and visualization of spline functions. Much of his work has been applied to fields relying on precise geometrics, such as film special effects and in the aircraft and automotive industries.

In the physical sciences, G. Brent Dalrymple (not pictured), Dean and Professor Emeritus, at Oregon State University, was honored for his work that improved the measurement of geologic time to new levels of precision, accuracy and application in the research of Earth’s past climates, as well as biological histories and major tectonic processes. He spent most of his career applying careful measurements to acquire the ages of rocks and minerals to verify and determine the timing and sequence of significant events in the history of the Earth and solar system. His methods were applied to dating the Lunar rocks that were returned from the Apollo 17 landing, for example.

Dalrymple was a leader in the plate-tectonic revolution, building and operating the Menlo Park Laboratory for precise dating of Earth’s magnetic-field reversals.

The president also presented a medal in physical sciences to Riccardo Giacconi, Research Professor at The Johns Hopkins University’s Department of Physics & Astronomy. Giacconi won the 2002 Nobel Prize in physics for laying the foundations of cosmic X-ray astronomy. He detected for the first time, sources of X-rays outside our solar system. He was the first to prove that the universe contains background radiation of X-ray light, and detected sources of X-rays now considered to contain black holes. His work also opened up new extragalactic studies of clusters and active galaxies.

The National Medal of Science was established in 1959 as a presidential award to be given to individuals for their outstanding contributions to knowledge in the physical, biological, mathematical or engineering sciences. In 1980, Congress expanded this recognition to include the social and behavioral sciences. The president appoints a committee of 12 scientists and engineers to evaluate the nominees for the award. The medal, including the 2003 honorees, has been awarded to 417 distinguished scientists and engineers whose careers span decades of research and development, as well as support and outreach to students and society.