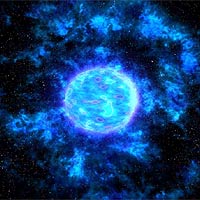 A Wolf-Rayet star in its final hours. Wolf-Rayet stars are extremely massive bluish stars, containing the mass of 10 to 15 suns. The blue-white color of the star indicates that its surface temperature is approximately 50,000 C. Surrounding the star are wisps of gas that have recently been shed from the outer atmosphere. Courtesy NASA/GSFC

Scientists arriving on the scene of a gamma-ray burst just moments after the explosion, have witnessed the death of a gigantic star and the birth of something monstrous in its place, quite possibly a brand new, spinning black hole.

The burst observation, featured in the March 20 issue of Nature, is the most detailed to date. The observation confirms that gamma-ray bursts announce the demise of the most massive stars in the universe, a theory called the collapsar model. NASA's High-Energy Transient Explorer (HETE), ground-based robotic telescopes, and fast-thinking researchers around the globe, made the prompt observation possible.

"This stunning observation places us in the fiery throes of a star explosion, peering through the debris at a newly formed black hole within," said Dr. Anne Kinney, NASA director for astronomy and physics, Headquarters, Washington.

"If a gamma-ray burst is the birth cry of a black hole, then the HETE satellite has just allowed us into the delivery room," said Dr. Derek Fox of the California Institute of Technology in Pasadena, Calif., the lead author of the Nature paper.

Gamma-ray bursts shine hundreds of times brighter than a supernova, or as bright as a million trillion suns. The mysterious bursts are common, yet random and fleeting. The gamma-ray portion of a burst typically lasts from a few milliseconds to 100 seconds. An afterglow, caused by shock waves from the explosion sweeping up matter and ramming this into the region around the burst, can linger for days or weeks in lower-energy forms of light, such as X rays or visible light.

A gamma-ray burst, named GRB021004, appeared on October 4, 2002, at 8:06 a.m. EDT. Wasting no time, HETE spotted the burst, nailed down a location, and notified observers worldwide within a few seconds, while the gamma rays were still pouring in. First on the scene was the Automated Response Telescope (ART) in Wako, Japan, observing the region just 193 seconds after the burst.

Fox pinpointed the afterglow shortly after this from images captured by a telescope on Mt. Palomar, near San Diego. Then the race was on, as scientists, using more than 50 telescopes, in California, across the Pacific, Australia, Asia, and Europe zoomed in on the afterglow before the approaching sunrise.

Scientists arrived on the scene of GRB021004 early enough to witness an entirely new phenomenon: the ongoing energizing of the burst afterglow for more than half an hour after the burst. This power must have been provided by whatever object produced the gamma-ray burst itself.

"Gamma-ray bursts must be many times more times powerful than we previously thought," said Dr. George Ricker of the Massachusetts Institute of Technology (MIT), Cambridge, Mass., principal investigator for the HETE mission. "The gamma-ray portion of the burst is perhaps just the tip of the iceberg," he said.

These findings support the collapsar model, where the core of a massive star collapses into a black hole. The black hole's spin or magnetic fields may be acting like a slingshot, flinging material into the surrounding debris. Scientists calculated that GRB021004 originated from a star 15 times more massive than the Earth's sun.

Gamma-ray burst hunters are greatly aided by three new developments: fast triggers from orbiting detectors; fast relays to observers worldwide via the Gamma-ray burst Coordinates Network; and fast responses from ground-based robotic telescopes. HETE is the first satellite to provide and distribute accurate burst locations within seconds. In December 2003, NASA will launch the Swift satellite, which will have an even greater capability to detect and locate bursts, as well as onboard optical, ultraviolet and X-ray telescopes.

Fox and his colleagues relied on data from ART in Japan, the Palomar Oschin Telescope and the Near Earth Asteroid Tracking camera, which are automated. HETE was built by MIT as a mission of opportunity under the NASA Explorer Program, collaboration among U.S. universities, Los Alamos National Laboratory, and scientists and organizations in Brazil, France, India, Italy and Japan.