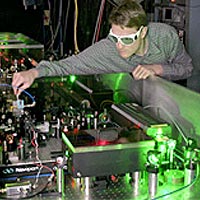 NIST physicist Scott Diddams adjusts a femtosecond laser system that is an important component of next-generation atomic clocks based on optical rather than microwave frequencies.

Three of the world’s premier measurement laboratories—including the Commerce Department’s National Institute of Standards and Technology (NIST)—have lined up the "hash marks" from four of the world’s best optical frequency rulers and declared that they match. The experiments, reported in the March 19, 2004, issue of the journal Science,1 are a significant step toward next-generation "atomic clocks" based on optical rather than microwave frequencies. Such clocks are expected to be as much as 100 times more accurate than today’s best timekeeping systems.

Optical "rulers" are lasers that emit pulses of light lasting just 10 femtoseconds (10 quadrillionths of a second, or 10 millionths of a billionth of a second). The experiments demonstrated that femtosecond laser devices could be used to reproducibly generate and accurately control the frequency of electromagnetic fields—a critical step in taking the measurement of time beyond its current accuracy level of about 0.1 nanosecond per day (i.e., losing or gaining no more than about 0.1 billionths of a second per day).

These devices are called "frequency combs" because a graph of the oscillating electromagnetic waves looks like the teeth of a hair comb. The output of these frequency combs can be used as a ruler for measuring time and frequency. For instance, a femtosecond frequency comb can reproducibly divide an interval of an hour into 10 quintillion (one followed by 19 zeroes) segments of equal time. The combs also could be used in making ultra-precise length measurements.

Until a few years ago, the femtosecond laser devices were the missing link in the engineering of optical atomic clocks. The world’s current best atomic clocks, such as the NIST-F1 laser-cooled cesium fountain clock, are based on microwave vibrations in atoms with a frequency of about 9 billion cycles per second. While this is very fast, electronic systems can accurately count these vibrations.

But no electronic systems exist that can directly count the optical oscillations in atoms such as calcium and mercury at about 500,000 billion cycles per second. A frequency comb, functioning like the electronics in a conventional clock, would be used to divide the very fast oscillations of future optical clocks into lower frequencies that can be linked to microwave standards such as NIST-F1 and compared to distribution systems such as the Global Positioning System (GPS) and broadcasts from NIST’s radio stations.

"These lasers are the gears of our next-generation clocks," says NIST physicist Scott Diddams, a co-author of the Science paper. "Our experiments made certain that the gears will run smoothly."

NIST physicists and collaborators compared the operation of four femtosecond laser systems of different designs—two systems built at NIST, one by the Bureau International des Poids et Mesures in France, and one by East China Normal University in Shanghai.

The team compared the devices in pairs, with reference to a third device arbitrarily chosen as a standard, on six days over a period of several months. The teeth of two combs were lined up and then a radio frequency "beating" technique—the optical equivalent of using a tuning fork to determine how closely a piano key is tuned to the correct note – was used to check the exactness of the match.

The NIST experiments are the first to compare the operation of multiple femtosecond frequency combs—thereby demonstrating reproducibility—and to verify that both the starting position of a comb and the spacing between the teeth can be controlled precisely.

The lasers used in the experiments emit light across a broad frequency range, from the visible to near-infrared parts of the spectrum. This versatility enables scientists to design frequency combs with teeth that match various optical frequency standards now under development, which, in turn, allows much better performance and increases the likelihood of practical applications resulting from the technology. One key application would be optical clocks much more accurate than today’s best clocks, such as NIST-F1.

Femtosecond frequency combs could be used to make more accurate optical clocks that could help answer research questions such as whether fundamental physical constants—essential to many practical calculations made in science—have changed very slightly over billions of years. NIST scientists already have used optical clocks to set limits on changes in one fundamental constant (the "fine-structure" constant that describes the strength of the electromagnetic force). 2 Further studies of this type could help develop a better understanding of the fundamental laws of nature.

Scientists from OFS Laboratories in New Jersey collaborated on the frequency comb comparisons with the team from NIST and the French and Chinese institutions.