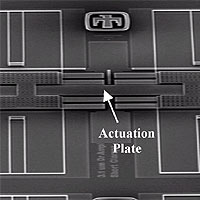 Scanning electron microscope image of the inchworm actuator. The inchworm design has a tangential force actuation plate in its central section, and on its two ends are frictional clamps where normal force is applied. In the clamps, load is applied electrostatically but borne mechanically to develop friction forces. To obtain motion, the leading clamp is fixed in place with a large voltage. The plate is then actuated by attracting it towards the substrate. Because the actuation plate is now bending, the trailing clamp, which is not loaded, slides a short distance (~ 40 nanometers) towards the leading clamp. The trailing clamp is now held fixed with a large voltage, and the voltages on the leading clamp and plate are turned off. The leading clamp then slips forward. This cycle is repeated over and over to obtain large-scale motion with very high precision.

Creating a tool small enough to measure friction on a microelectromechanical systems (MEMS) device is not an easy task. The tool has to be about the width of a human hair.

Yet, researchers at the at the National Nuclear Security Administration’s Sandia National Laboratories have developed a new "inchworm" actuator instrument that provides detailed information about friction at the microscale.

The main objective of the project was to study the validity of Amonton’s Law at the microscale. This law, first stated 300 years ago, says friction force is proportional to normal force (normal means perpendicular to the surfaces). Although it remains a good description of friction today, there are interesting deviations from Amonton’s Law, especially at low normal forces, where adhesion between the two surfaces is thought to contribute an extra force. Because of the large surface-to-volume ratio at the microscale, these adhesive forces could cause a strong deviation from Amonton’s Law.

"We must accomplish several different functions in one device to study the laws of friction at the microscale," said Sandia researcher and inchworm creator Maarten de Boer. "We need to build an actuator that controllably and accurately generates both very low and very high forces."

These forces need to be applied both perpendicularly and tangentially to test the validity of Amonton’s Law over a wide force range, he said. Another goal is to see if the friction measurements can describe the actual operation of the device.

Parallel plates are easily fabricated in MEMS and can be used to obtain large normal forces. However, conventional MEMS tangential force actuators, known as comb drives, provide only 10 micronewtons of tangential force. De Boer wanted to achieve millinewtons of force and resorted to a mechanical amplification scheme.

"We can bend plates to convert normal force to tangential force," he said. The inchworm has a force-amplifying plate that spans two frictional clamps. While "inching" along, its step size is very small, about 40 nanometers, but its stepping cycle can be repeated over and over.

De Boer and Sandia postdoctoral researcher Alex Corwin developed a measurement methodology to confirm that the inchworm operates at up to 80,000 cycles a second, with a velocity of up to 3 millimeters per second.

The force the inchworm develops is measured by attaching it to a load spring that has a special nonlinear characteristic — for each step the inchworm walks, the force increases more than it did in the previous step. A maximum tangential force of 2.5 millinewtons is achieved when the inchworm stalls out, about 250 times more force than a comb drive.

So far this describes the inchworm’s ability to move and provide forces. But de Boer asks the question: How does the inchworm give information on friction?

To determine the coefficient of static friction, the inchworm is walked out a long distance of about 20 micrometers against the nonlinear load spring. Then, a large voltage on one clamp holds it in place. This voltage is then gradually reduced, which decreases the frictional force it can sustain. At a certain point, the load spring overcomes that frictional force, and the inchworm slides forward a short distance (several micrometers) until the load spring force decreases enough that it stops again. This measurement is now repeated and the next measurement is at a much lower load due to the load spring’s nonlinearity. Now, Amonton’s Law can be studied over a wide force range.

Working with Bob Ashurst, University of California, Berkeley, de Boer found that the friction force depends on the normal force from 1 millinewton down to normal loads as small as 50 micronewtons, in accordance with Amonton’s Law. Corwin further decreased the load and found that the coefficient of static friction began to increase. This was the deviation from Amonton’s Law due to adhesive forces, de Boer said.

De Boer and Corwin also mapped out a way to measure dynamic friction, accounting for the friction forces in the presence of inertial forces, air damping forces, and the spring force. The result was that dynamic friction is about 80 percent of static friction.

Gross slip before the static friction event is reached De Boer worked with David Luck, Sandia researcher, to determine whether the frictional measurements made so far described the behavior of the device when it was operated. This test was different from the friction test and was conducted by loading the trailing clamp during the stepping cycle. They expected the average step size to decrease and it did. But when Luck tried to model the reduction in step size using the measured coefficients of friction, he could not get good agreement — the model predicted much larger step sizes than observed experimentally.

Something other than the coefficient of friction had to be affecting the step size of the inchworm in operation. The researchers had assumed that the leading clamp was stationary in the stepping cycle, because the load applied to it was much larger than the load applied to the trailing clamp. De Boer reasoned that even though the leading clamp load was much larger, perhaps it was slipping back rather than remaining in position. Tests were devised to determine whether this slippage was occurring and the researchers inferred that it was.

Corwin wanted to see if this sliding could be directly observed. By using high-resolution imaging, he looked for movement of the inchworm before the static friction event. He observed slip over distances as large as 200 nanometers.

"A slip this large was very surprising." De Boer said, "Theories predict about one or two nanometers of slip given the details of our frictional interfaces. But in our experiments, the slip is one hundred times larger than this."

This means there is some gross slip mechanism going on before the static friction limit is reached, he said.

"This gross sliding is clearly very important for MEMS, where you want to position an object with nanometer accuracy for optical applications," he said. "It is not something indicated by other friction instruments, but knowing about it will enable us to predict friction-related motion in MEMS with much better confidence."

Besides serving as a test structure useful for model friction studies, the inchworm actuator is attractive for use in actual MEMS applications. Marc Polosky, Sandia staff member, demonstrated its use in a MEMS system that performs mechanical logic functions.

"I had been looking for a good linear actuator," Polosky said. "The inchworm provides a very high output force and can be moved controllably both backwards and forwards. On the MEMS scale, stiction forces can degrade system performance."

MEMS actuators that have large output forces improve design margin and reliability. "The inchworm actuator enabled us to replace a number of components in our discrimination system and improved our production yield," Polosky said.

Dustin Carr, Sandia staff member, believes the inchworm actuator can be especially useful in applications where precise positioning and control of micro-optical elements is necessary.

"The ability to do nanoscale positioning over many microns of range can enable the miniaturization of an optical lab benchtop, without using bulky or power-hungry piezoelectric devices," Carr said.

"Modelers are excited by the inchworm test results, and now face the challenge of understanding and modeling newly observed phenomena such as gross slip prior to sliding," Reedy said. "Our goal is to develop a capability to perform finite element simulations of MEMS components that accurately predicts response in the presence of adhesion and friction."

Sandia is also working with Rob Carpick, a nanotribology expert and professor at the University of Wisconsin.

"Working with the inchworm team gives us a chance to connect the nano-scale measurements we do at Wisconsin with the micro-scale measurements that come from the inchworm," Carpick said. By looking at the same materials under the same conditions, we want to see if we can determine the fundamental underpinnings of Amonton’s Law. This could have implications in the study of friction that reach beyond the inchworm."

News Story Origin and Copyright: Sandia
Click here for the original news release.
'The mathematician's patterns, like the painter's or the poets, must be beautiful; the ideas, like the colours or the words, must fit together in a harmonious way. Beauty is the first test: there is no permanent place in the world for ugly mathematics.'