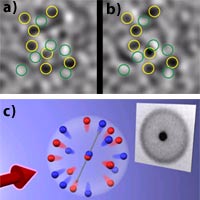 Similar patterns of 'noise' are evident in these two images. The images are taken directly after molecules have been split into entangled atom pairs. Each of the pictures shows the absorption of laser light by potassium atoms in one out of two different energy states. High concentrations of atoms absorbing light are circled in yellow, and areas with fewer atoms are circled in green. The similar pattern in the two images directly shows the correlation between atoms in the different states.

Ultracold molecules (center) are split into entangled pairs of atoms flying apart in opposite directions. A laser beam (left) is used to create shadow images of the cloud (right). The pairs of entangled atoms can then be found by carefully studying the noise pattern in these pictures.

Patterns of noise—normally considered flaws—in images of an ultracold cloud of potassium provide the first-ever visual evidence of correlated ultracold atoms, a potentially useful tool for many applications, according to physicists at JILA, a joint institute of the National Institute of Standards and Technology (NIST) and the University of Colorado at Boulder.

Described in the March 21 online issue of Physical Review Letters,* the noise analysis method could, in principle, be used to identify and test the limits of entanglement, a phenomenon Einstein called “spooky action at a distance.” With entangled atom pairs, for example, the properties of one atom instantaneously affect the properties of its mate, even when the two are physically separated by substantial distances. Such tests of the basic rules of quantum physics could be helpful, for example, in efforts to design quantum computers that would use the properties of individual neutral atoms as 1s and 0s for storing and processing data.

The method demonstrated at JILA also could enable scientists to “see,” for the first time, other types of correlations between atoms in fermionic condensates, a new quantum state first created by the same JILA research group, in which thousands of pairs of atoms behave in unison. And it could perhaps be applied in highly sensitive measurement techniques using beams of entangled atoms.

“There are a number of interesting quantum states that are not obviously seen if you just take a picture,” says Deborah Jin of NIST, leader of the research group that developed the new method and also previously created fermionic condensates. “A Fermi condensate, for example, would not show up in an ordinary image. However, correlations between atoms should actually show up in the noise in these images.”

The noise appears as speckles in images of a cloud of ultracold potassium atoms made under very specific conditions. This noise is not random, as would be expected ordinarily, but rather appears in duplicate patterns suggesting, although not proving, that pairs of atoms are entangled with each other—even when separated by as much as 350 micrometers. (For comparison, a human hair is about 70 micrometers wide.)

In the JILA method, Markus Greiner, Cindy Regal and Jayson Stewart use a laser to trap and cool a cloud of about half a million potassium atoms to near absolute zero temperature. Then a second laser is shined on the atoms, which absorb some of the light, and an image is made of the shadow pattern behind the atoms. The darkest areas have the highest concentrations of atoms that absorb the light. The grainy or dappled pattern of lighter and darker areas represent the so-called “atom shot noise.”

The JILA atom imaging system is designed to minimize other sources of noise, such as from the laser. For instance, the set-up ensures that a relatively large amount of light is captured per pixel (or dot) in the digital image, and that each atom absorbs a relatively large amount of light. In addition, image-processing techniques are used to filter out laser noise and to find the optimal pixel size for “seeing” the noise pattern.

For the experiments, the atoms are prepared in two groups, one at the lowest of 10 possible energy levels in potassium, and the other at the next-lowest energy level. A magnetic field is swept across the trapped mixture of the two groups to combine pairs of atoms of different energy levels into weakly bound molecules. (In this way a molecular version of a Bose Einstein condensate can be created, a state of matter first realized with atoms in 1995 at JILA.) Then the magnetic field is increased to split the molecules and create pairs of atoms that are, based on previous studies and fundamental quantum mechanics laws, known to be entangled.

In one experiment, the JILA team made images of the two groups of atoms separately by tuning the laser to a frequency of light absorbed by only one group at a time. The two images were physically overlaid so that the shot noise in sets of corresponding pixels could be compared. Using mathematical techniques to analyze the images, the scientists found similar patterns of dark and light areas, clear evidence for correlated atoms.

In a second experiment, scientists split the molecules with a radio wave pulse into pairs of entangled atoms flying apart with equal momentum but in opposite directions. The scientists again took images of each set of atoms and overlaid them. But this time, they systematically rotated one image to check for correlations in noise patterns. Similar patterns were found after a 180-degree rotation, in pixels on opposite sides of the cloud, clearly indicating correlated atom pairs. In this experiment the atom pairs are detected as far as 350 micrometers apart, and as a result fascinating quantum phenomena like the “spooky action at a distance” could be studied.

The research was supported in part by the National Science Foundation and National Aeronautics and Space Administration.