Building a Better Nanoworld with Microbes 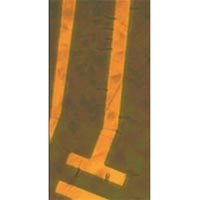 Live bacteria (faint dark streaks) are directed down a narrow channel to a pair of electrodes where they are trapped by mild electric currents. The bacteria, in effect, become 'bio-junctions' and can be captured, interrogated and released at will. The use of living microbes in such a technology could form the basis for new ways of assembling nanodevices of all kinds. One potential application is as a real-time bio-sensor that could be used in public places to instantly detect and characterize the microbes that might be used in a bio-terror attack.

Taking a new approach to the painstaking assembly of nanometer-sized machines, a team of scientists at the University of Wisconsin-Madison has successfully used single bacterial cells to make tiny bio-electronic circuits.

The work is important because it has the potential to make building the atomic-scale machines of the nanotechnologist far easier. It also may be the basis for a new class of biological sensors capable of near-instantaneous detection of dangerous biological agents such as anthrax.

The approach, reported here today (March 17, 2005) at a meeting of the American Chemical Society, suggests that microbes can serve as forms for complicated nanoscale structures, perhaps obviating, in part, the need for the tedious and time-consuming construction of devices at the smallest scale.

The work is also scheduled to appear in the April issue of the journal Nano Letters.

'One of the great challenges of nanotechnology remains the assembly of nanoscale objects into more complex systems,' says Robert Hamers, a UW-Madison professor of chemistry and the senior author of the new reports. 'We think that bacteria and other small biological systems can be used as templates for fabricating even more complex systems.'

Toward that end, Hamers and his UW-Madison colleagues Joseph Beck, Lu Shang and Matthew Marcus, have developed a system in which living microbes, notably bacteria, are guided, one at a time, down a channel to a pair of electrodes barely a germ's length apart. Slipping between the electrodes, the microbes, in effect, become electrical 'junctions,' giving researchers the ability to capture, interrogate and release bacterial cells one by one. Built into a sensor, such a capability would enable real-time detection of dangerous biological agents, including anthrax and other microbial pathogens.

'The results here are significant because while there has been much attention paid to the ability to manipulate nanoscale objects such as nanotubes and nanowires across electrical contacts, for many applications the use of bacterial cells affords a number of potential advantages,' Hamers says.

For example, capitalizing on the complex topography of the bacterial cell surface and microbial interactions with antibodies, scientists could potentially construct much more complex nanoscale structures through the natural ability of cells to dock with different kinds of molecules. Such a potential, Hamers argues, would be superior to the painstaking manipulation of individual nanosized components, such as the microscopic wires and tubes that comprise the raw materials of nanotechnology.

'We spend a lot of time making tiny little nanowires and things of that sort, and then we try to direct them in place, but it is very hard,' says Hamers. 'However, bacteria and other biological systems can be thought of as nature's nanowires that can be easily grown and manipulated.'

In the series of experiments underpinning the new Wisconsin work, the group showed that it is possible to capture cells along an electrode and then direct them down a narrow channel that acts as a conveyor. Small gaps in the electrical contacts along the conveyor serve as traps that can hold single bacterial cells while their electrical properties are measured. Once the microbial interrogation is completed, the live cell can be released.

'You can measure and release them at your leisure,' explains Beck, the lead author of the Nano Letters paper and a UW-Madison postdoctoral fellow.

He says the chemicals naturally expressed on the surface of the bacterium could be wired in a way that would be the basis for a real-time biological sensor, a device that could be seeded in airports, stadiums, railway stations, skyscrapers, mailrooms and other public areas to sniff for dangerous biological agents that might be used in a bioterror event.

The device could be constructed, according to Beck, utilizing the natural features bacteria and other microbes use to sense their environments. The wired bacterial cells, coupled with modern microelectronics, would have the ability not only to detect dangerous agents (anthrax spores, for example) but they then could sound the alarm and call for help.

'You could even engineer bacteria to have different surface molecules that you could capitalize on,' says Beck.

For instance, it may be possible, the Wisconsin scientists say, to attach microscopic gold particles to the shell of the bacterium, making it more like a nanoscale gold wire.

Hamers believes the new work could be the basis for bringing nanotechnology and biology together in unprecedented ways.

Moreover, the ability to routinely and easily capture and analyze individual microbes will have implications for conventional biotechnology as well. For example, chemical modifications to the electrode traps might make it easier for scientists to retrieve specified cells from a complex mixture.

The work by Hamers' group was funded by the National Science Foundation. The Wisconsin Alumni Research Foundation, a private, nonprofit organization that manages UW-Madison intellectual property, has applied for patents for the technology.