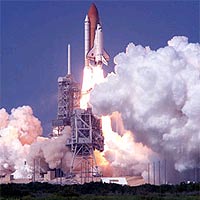 Launch pad 39B at Kennedy Space Center in Florida will soon see the Shuttle blasting off again for a new exciting mission in space. According to NASA’s current schedule, this will be between 15 May and 3 June (the precise date will be set once the flight readiness review process has been completed at the end of April).

The success of this mission will secure the future of the International Space Station (ISS), as the Shuttle is the only spacecraft capable of transporting new modules from the USA, Europe and Japan to continue its construction. ESA needs the Shuttle to deliver its Columbus laboratory to the ISS, where it will enable international crews to conduct a variety of experiments in material sciences, medicine, biology and technology.

Through the nationally-funded European Soyuz missions with ESA astronauts to the ISS, today Europe has become the largest scientific user of the Space Station, while ESA has developed sophisticated multi-purpose experimental facilities for the Columbus laboratory to further enhance the ISS utilisation programme.

Since the Columbia accident on 1 February 2003, NASA has made steady progress in addressing key safety issues and preparing the Shuttle fleet for spaceflight. Improvements include:

a redesigned external tank, which reduces the risk of foam hitting the orbiter during lift-off;
new sensors at the leading edges of the wings to detect debris impact using accelerometers and real-time transmission of data; more and improved cameras on the Shuttle and on the ground to detect debris; an extension boom to the Shuttle's Canadian robotic arm that will allow astronauts to inspect the spacecraft for any damage.

The seven-strong Discovery crew will fly to the ISS to test and evaluate the new technologies and procedures for Shuttle inspection and in-orbit repair. The crew are: Commander Eileen Collins - this is only the second ever Shuttle mission headed by a woman - Pilot James Kelly, Mission Specialists Soichi Noguchi from Japan, Steve Robinson, Andy Thomas, Wendy Lawrence and Charles Camarda.

Steve Robinson and Soichi Noguchi will make three spacewalks outside the Shuttle. STS-114 will be the third trip to the ISS for the European-built multi-purpose logistics module (MPLM), now named 'Raffaello'. It’s essentially a 'removal van' that transports supplies to the Station. Raffaello will deliver consumables and supplies, notably food, water and air, and of particular interest to the media, batteries and a photo and TV resupply kit with new camera lenses and videotapes.

Twelve days after lift-off, Discovery is scheduled to re-enter the atmosphere and land at the Kennedy Space Center.

Successful completion of this flight will open the door to further missions by ESA astronauts to the ISS. With the Shuttle's return to flight, the size of the permanent expedition crews on the ISS can be brought back to three, leading to resumption of the full experimental programme. In 2006 ESA’s unmanned Automatic Transfer Vehicle (ATV) will make its maiden flight, having been put into orbit by an Ariane 5 launcher, carrying equipment, propellant, food, water and air for the crew on board the ISS, after which it will be performing similar missions every 12 to 18 months.